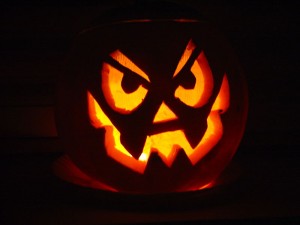 On October 31st, tens of millions of Americans will celebrate Halloween by going trick-or-treating or by attending costume parties.  For most people, Halloween is a fun evening of dressing up and eating too much candy, and it is a holiday that is becoming more popular than ever.  According to a recent report from the National Retail Federation, seven out of every 10 Americans plan to celebrate Halloween this year.  That is the highest level that the National Retail Federation has ever recorded.  This year, it is being projected that Americans will spend $6.86 billion on Halloween.  Every year Halloween just keeps getting bigger and bigger.  But there is also a dark side to Halloween.  It is not “politically correct” to talk about this, but the truth is that the way that many people choose to celebrate Halloween is the kind of stuff that real life nightmares are made of.

This article is controversial.  If you are going to be very offended or very frightened by what really goes on deep in the woods on Halloween night, then you probably should not read it.

It is not “cool” to talk about the dark things that happen on Halloween.  A lot of people will get very upset when they read this article.  But just because people want to deny what is going on does not mean that the horrific rituals and blood sacrifices described below do not exist.

So please be warned.  This article is attempting to discuss a very, very controversial subject.  If you think that this may deeply offend or deeply traumatize you, then you might not want to read it.

Let’s ease into this slowly.

So how exactly did we get this holiday that we call “Halloween”?

A recent article posted on Raiders News Update summarized some of the history behind this holiday….

ALL HALLOWS’ EVE, or Halloween, originated in the 7th century AD. It was celebrated on 13 May and was a night for remembering deceased saints and martyrs. The date was later changed to November 1 in order to Christianize the pagan holidays Beltane and Samhain–festivals of summer, winter and fire.

The Catholic Church attempted to make a very popular pagan festival an official holiday of Catholicism.  But the truth is that Samhain was celebrated for many centuries before “Halloween” was ever invented.  In fact, there are many groups that celebrate Samhain even today.

A lot of Protestants did not approve of “Halloween”.  In many areas of early America, Halloween was considered to be so evil that it was banned.  But later on as waves of immigrants from Europe came over the celebration of Halloween began to spread and today it has been overwhelming accepted by most of society.

When I was growing up, most children would dress up as ghosts, cartoon characters or super heroes on Halloween.

But today, Halloween has become much more “edgy” and much more “seductive”.

An article posted on the website of the L.A. Times noted that even girls as young as seven or eight years old are now dressing very “sexy” for Halloween….

“Halloween costumes for 7- and 8-year-old girls and even younger have become downright titillating, and for tweens and teens, the vast majority of those sold in stores and on the Internet are unabashedly sexually alluring.”

But is this a good thing?  In a recent article for the Washington Times, Tricia Owen lamented how depraved Halloween is becoming….

What’s happened to Halloween? I live around the corner from one of those pop-up costume shops, and looking in the window is truly frightening. Not because of all the ghouls and goblins, but because of what can only be described as the debasement of Halloween. There are the sexy nurse, sexy teacher, sexy witch, naughty nun – a seemingly endless supply of not sexy, but R-rated costumes.

Unfortunately, the truth is that Halloween was never an “innocent” holiday.  It is just that mainstream America is quite a bit more eager to embrace the darkness of Halloween these days.

Most Americans are completely unaware of it, but the reality is that some very, very bizarre rituals take place on Halloween night.  For some, Halloween night is the most important night of the year.

There is a reason why many animal shelters and pet stores refuse to adopt out black cats in the weeks leading up to Halloween.

The following comes from an article in the New York Daily News….

“This is a time when blood rituals take place,” said Hedy Litke, director of animal placement at the ASPCA. “Black cats are often sacrificed.”

Once again this Halloween, there will be cats, dogs and other animals that will be tortured and/or sacrificed.

The people that work at animal shelters day in and day out know what is going on.  The following is from an article in the Baltimore Sun….

“As horrible as this may sound, cats are tortured around Halloween time,” said Deborah Thomas, executive director of the Maryland SPCA, which for years has enforced a virtual moratorium on black cat adoptions in the days before Halloween. “It’s just incredible what people will do to cats, as if they don’t have any feelings.”

Reportedly, black cats and white cats are the ones most commonly used in these rituals, but as an article in the L.A. Times noted, these groups will use cats of any color if they are desperate….

“There are also so-called religious groups that sacrifice animals,” said Leslie Eppick of the Glendale SPCA. “If desperate, they will take any cat, no matter what color.”

For those that love cats, stories like these are absolutely horrifying.  How anyone could treat cats this way is absolutely inconceivable.

But this stuff really happens.

In fact, if you are squeamish, you might not want to read this next part.

The following is from an article posted on wsbtv.com….

The black cat was carried into the woods near a Clayton County, Ga. apartment complex, sprayed with flammable liquid and set on fire.

In Stockbridge, Ga., someone tried to chemically burn a devil caricature, horns and all, into the face of a black kitten.

“I think more happens than we know about,” Deborah Rumbold of PeachState Pet Partners said.

In recent years, there has been an explosion of interest in the occult in the United States.  Some of the most popular books, television shows and movies have been about vampires, witches, warlocks, ghosts and dark supernatural phenomena.

Unfortunately, some people seem to want to act out these things in real life.  For example, down in Florida recently an 18-year-old girl was charged along with four others of beating a 16-year-old boy to death.

What was so strange about this was the fact that the 18-year-old girl actually believes that she is part vampire and part werewolf.

The following comes from an article about this bizarre incident from the local NBC affiliate in Miami….

Stephanie Pistey confirmed assertions by police in Parker, Fla., that the people involved in the July murder of 16-year-old Jacob Hendershot were in a vampire cult. Pistey, who was arrested last Monday and charged with accessory to murder, said she sees herself as a modern day Dracula.

“Since I was like 12 every fiber in my body, basically everything, I know this is going to be crazy, but I believe that I’m a vampire and part werewolf,” Pistey told WBBH-TV.

Sadly, this is not just an isolated incident.  Just check out the following description of another “vampire crime” that comes from a recent article by the Christian Post….

Just a few months ago, a 19-year-old in Texas, claiming to have been a 500-year-old vampire needing to be fed, broke into a woman’s home, threw her against the wall, and tried to suck her blood.

Whether you want to deny it or not, the truth is that there are some people out there that take this stuff very, very seriously.

For many of them, Halloween is the highlight of the year.

You see, it is not just cats that are abused and sacrificed on Halloween.

Children are often involved as well.

You won’t find it very often in the mainstream news, but the reality is that a lot of people have come forward with stories of what really happens on Halloween night.

If you don’t want to believe what they are saying, then don’t believe it.

But that doesn’t mean that it is not happening.

You can view video from a documentary of one ex-Satanist describing his involvement in horrific blood rituals on Halloween night right here.

Do you think that he is lying about the sacrifice of that little girl and about how the Satanists would drink her blood?

Many people simply do not want to believe that such things are going on in America.

Sadly, a lot of people have come forward with tales of ritual abuse.  The following is what one blogger shared about her memories of Halloween abuse from childhood….

Some of my earliest memories of the ceremony and worship of the dark side that I experienced here follows. One of the hardest involved being up in the canyon at the lodge where they gathered. Very late into the night of the moons shining upon them they would begin. After the normal families left and the “die hards” lit the bonfire and continued to binge on the feasts and drink the hard booze it would commence. There was a man who was the leader. He would “all gather, lets get this thing on the road” and cheers would sound up as the wild tones would echo. I and other kids, children of the others there were in a cabin like building. The big kids would then get the little kid that was chosen by the adults. That night it was me.

You can read the rest of her nightmarish story right here.

There are some groups that actually use “breeders” to produce babies that will be used for child sacrifices.  The following is what Nancy Dunn (who was raised in a Satanist family) recently told CBN….

“My father worked in the aerospace industry. My mother worked for a doctor. On the outside just looked normal, but nobody knew what was going on behind closed doors.

My father was actually a Satanic high priest, so he did all kinds of evil things. He sexually assaulted me, took me to satanic rituals. My father actually used me as a baby breeder, which means I was impregnated so the Satanists would have a baby to sacrifice to the devil in their Satanic rituals. As soon as I was able to have a baby, I was pregnant.”

As I mentioned earlier, it is very controversial to discuss the dark side of Halloween.

There is stuff going on out there that is absolutely unimaginable.