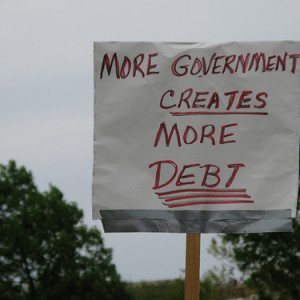 As we approach election season here in 2010, American voters are seemingly more angry than at any other time in recent memory.  More than at any other time in modern American history, Americans are seeking out alternatives outside the “two party system” (such as the Tea Party movement) through which to express their anger.  So why are the American people so angry?  Well, the truth is that there are a whole lot of reasons, but one of the biggest reasons is the horrific mismanagement of our national finances that has been going on in Washington.  The “Congress critters” have been piling up the biggest mountain of debt in the history of the world, and millions of Americans are now waking up and are now realizing that our financial future has been absolutely obliterated.  We have accumulated a debt that is impossible to repay.  In fact, it is rapidly getting to the point where it will become impossible even to service the debt.  All of this debt is literally killing the American Dream.  An increasing number of Americans now realize the horror of what we have done, but the reality is that it may be far too late to reverse the damage that has taken place.

The amount of money that the U.S. government spends is absolutely mind blowing.  For example, did you know that the U.S. Congress will spend about 25.4 percent of GDP this year?

It is hard to continue to say with a straight face that we are not a socialist nation when the government is spending that kind of money.

And that is just the federal government – state and local governments spend massive amounts of money on top of that.

But we will get to that in a minute.

First let’s examine the horrific amounts of debt that the federal government is piling up.

In an article that we recently authored on another website, we noted that back in 1950, the total debt of the U.S. government was only about 257 billion dollars.

From the creation of the United States until 1950, we had accumulated only 257 billion dollars of debt.

Let that sink in for a bit.

We have a national debt that is exploding so fast that it is hard to even put the horror of it into words.

According to Erskine Bowles, one of the heads of Barack Obama’s national debt commission, the U.S. government will be spending $2 trillion just on interest on the national debt by 2020.

So just how big is 2 trillion dollars?

Well, the entire U.S. government budget is less than 4 trillion dollars for the entire year of 2010.

So how in the world are we going to be able to afford to pay 2 trillion dollars in interest when the year 2020 rolls around?

It is hard to even conceive of amounts of money that large.

If you went out today and started spending one dollar every single second, it would take you more than 31,000 years to spend one trillion dollars.

But things are even worse than the official numbers tell us.

Do you think a great politician can come along and fix that kind of a mess?

No, not under the current system.

But it just isn’t the U.S. government that is the problem.

As we have written about previously, state and local governments across the United States are completely broke.

In fact, it would be easy to make the argument that many of the states are in even worse financial position than the U.S. government is.

Illinois is in even worse shape.

There is a very real possibility that we could see a number of U.S. states actually default on their debts in the next few years.

Of course the federal government could step in and bail them out, but that would just add more debt at the federal level.

Meanwhile, the states continue to borrow money at a staggering pace.

It is being reported that the 50 U.S. states have racked up a record $2.4 trillion in bond debt during the recent economic downturn.

But things get even worse the further down the road you look.

Robert Novy-Marx of the University of Chicago and Joshua D. Rauh of Northwestern’s Kellogg School of Management recently calculated the combined pension liability of the 50 U.S. states.  What they found was that the 50 states are collectively facing $5.17 trillion in pension obligations, but they only have $1.94 trillion set aside in state pension funds.  That is a difference of 3.2 trillion dollars.

So where in the world are the 50 states going to get an extra 3.2 trillion dollars to meet those pension obligations?

America has become absolutely addicted to debt and it is destroying us.  If you add up all government, business and consumer debt, the total is equivalent to approximately 360 percent of GDP.

We have built an economy on debt and paper money and now it is starting to implode.

The truth is that we are all to blame.  There are very few of us that have not run out and piled up debt at some point in our lives.

At the end of 2008, the total credit card debt owed by American consumers totalled more than 972 billion dollars.

That amount is greater than the GDP of the world’s 122 poorest nations combined.

Needless to say, America has a debt problem that is not sustainable.

This giant bubble that we have created is going to burst.

In fact, it has already started bursting.

But now we are going to learn some very painful lessons as a society.  The “good times” that we are enjoying are going to go away.  Society is going to undergo dramatic changes.  The entire economic system is going to implode.

So are you ready for all of this?

You still have a little bit of time to prepare, but time is running out.