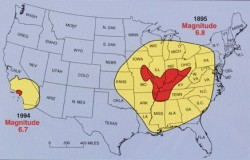 So exactly what events have happened recently that are causing people to take a close look at the New Madrid fault zone?  Well, just consider the following examples of things that have been popping up in the news lately….

*According to the U.S. Geological Survey, more than 500 measurable earthquakes have been recorded in central Arkansas just since September.

*A magnitude-3.8 earthquake that shook north-central Indiana on December 30th is being called “unprecedented”. It was strong enough to actually cause cracks along the ground and it was felt in portions of Ohio, Illinois, Wisconsin and Kentucky.

*More than 3,000 red-wing blackbirds fell out of the sky dead in the Arkansas town of Beebe on New Year’s Eve.

*Large numbers of dead birds were also found in Kentucky right around Christmas.

*Approximately 100,000 fish washed up dead on the shores of the Arkansas River just last week.

So could all of these things have some other very simple explanation?

But the fact that they all happened in or around the New Madrid fault zone is starting to raise some eyebrows.

About 200 years ago, in 1811 and 1812, there were four earthquakes that were so powerful in the area of the New Madrid fault zone that they are still talked about today.  All four of the quakes were estimated to have been magnitude-7.0 or greater.  It is said that those earthquakes opened deep fissures in the ground, caused the Mississippi River to run backwards and that they were felt as far away as Boston.

The last major earthquake to hit the region was a 5.4-magnitude quake that struck the town of Dale, Illinois in 1968.  Things have been strangely quiet in the region since then until recently.

If a true “killer earthquake” struck along the New Madrid fault zone today, cities such as St. Louis, Missouri and Memphis, Tennessee could potentially be completely destroyed.

Unfortunately, this is not an exaggeration.

The following video describes just how incredibly powerful the earthquakes along the New Madrid fault in 1811 and 1812 actually were….

So could such a thing happen today?

Well, that is exactly what many seismologists now fear.  The following video news report from ABC News explains why so many scientists are so concerned about the New Madrid fault zone….

One interesting theory is that the “oil volcano” unleashed by the BP oil spill in 2010 may have sparked renewed seismic activity in that part of the world.

According to Reed, there is substantial evidence that the New Madrid fault zone is directly connected to “deeply buried tectonics” in the Gulf of Mexico….

“This entire zone through the United States is suffering some type of tectonic activity that I believe is tied to the deeply buried tectonics in the Gulf of Mexico.”

So did BP disturb those “deeply buried tectonics” by drilling such a deep well and unleashing all that oil that flowed into the Gulf of Mexico?

If a truly historic earthquake did strike along the New Madrid fault the amount of damage that could be done to surrounding states such as Illinois, Kentucky, Mississippi, Indiana, Alabama, Missouri, Arkansas and Tennessee could potentially be unimaginable.

Jeremy Heidt of the Tennessee Emergency Management Agency says that life in the region would be instantly transformed in the event of a major earthquake along the New Madrid fault….

“All communications would be out. All air travel would be out as the FAA air control would go down. All rail travel would fail. Ports would shut down; oil and natural gas pipelines could be off line.”

According to a recent study by the University of Illinois, a 7.7-magnitude earthquake along the New Madrid fault would leave 3,500 people dead, more than 80,000 injured and more than 7 million homeless.

So what would happen if an 8.0 earthquake struck?

There are even some who believe that if a powerful enough earthquake hit the New Madrid fault someday it could potentially alter the surrounding geography enough that it could actually create a new major body of water in the middle of the United States.

So, no, it is not just California that needs to worry about “the Big One”.

Right now seismic activity has been dramatically increasing all over the globe.  Just think of the unprecedented number of volcanic eruptions that we have seen over the past year.  Major earthquakes have been popping up all along the “Ring of Fire”.  Just over the past couple of days a magnitude-7.1 earthquake hit central Chile and a magnitude-7.0 earthquake struck northern Argentina.

So to think that “it can’t happen” in the United States is just being totally naive.

Let us hope and pray that a devastating earthquake does not hit the New Madrid fault any time soon, because such an event could completely wipe out our economy.  The U.S. economy is already teetering on the brink of disaster, and all it would take is one major blow to bring the entire house of cards crashing down.

Just remember what happened in Haiti.  A magnitude-7.0 earthquake killed 230,000 people and caused such horrific devastation that it is still hard to even try to put it into words.  Let us hope and pray that nothing like that happens in any U.S. city any time soon.