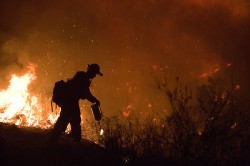 What in the world is really going on at Los Alamos, Ft. Calhoun and Fukushima?  There are millions of Americans that would like the truth about what is happening at these nuclear facilities, but the mainstream media has been strangely quiet.  Instead, the mainstream media is running headlines such as “10 Dirtiest U.S. Beaches Named” and “Pole Dance Stops Times Square Cold”.  Yes, those are actually headlines that appeared on the front pages of major mainstream news websites in the United States today.  Sadly, you really have to dig to find anything about the problems that are currently happening at nuclear facilities in the United States, and the mainstream media seems to have gotten really tired of talking about Fukushima.  It is almost as if the mainstream media actually prefers to talk about mindless things rather than focus on the truly important events that are happening all around us.

Look, most of us are not nuclear experts, but when one of our nuclear plants is completely surrounded by flood waters and another one is being seriously threatened by a raging wildfire we have a right to be concerned.

Sadly, the coverage by the mainstream media has been so sparse that the majority of Americans don’t even know that there are problems at Los Alamos and Ft. Calhoun.  Most Americans also don’t understand how serious the Fukushima disaster really is.

Let’s take a closer look at what has been happening at Los Alamos, Ft. Calhoun and Fukushima lately….

A 93 square mile wildfire has approached the perimeter of the Los Alamos nuclear lab in New Mexico.  Authorities are warning that this wildfire could soon double or triple in size and an all-out effort is being made to fight it.

Right now the major concern is that the raging wildfire could threaten a dump site where an estimated 20,000 55-gallon drums of nuclear waste are being stored.

Instead of being stored securely, these 20,000 drums of nuclear waste are being stored in above-ground tents.

Authorities are telling the public that the wildfire has gotten to within a few miles of the dump site.

However, it has also been reported that the wildfire is now within 50 feet of the Los Alamos facility itself, and there was even one report that flames were “just across the road” from the southern edge of the famous lab where the very first nuclear bomb was developed during World War II.

Authorities at Los Alamos continue to insist that there is nothing to be concerned about.

But that is also what they said about Fukushima at first.

Joni Arends, the executive director of the Concerned Citizens for Nuclear Safety, says that if the wildfires reach the nuclear waste it could be a total nightmare….

“The concern is that these drums will get so hot that they’ll burst. That would put this toxic material into the plume. It’s a concern for everybody.”

But the dump site is not the only concern.

According to a recent Reuters article, there is quite a bit of plutonium at the Los Alamos facility….

John Witham, a spokesman for the anti-nuclear group Nuclear Watch New Mexico, said it is the only place in the country that produces plutonium pits that are carried in the core of nuclear bombs.

Three metric tons of highly radioactive weapons-grade plutonium is stored in concrete and steel vaults in the basement floor of a building near the center of the complex, with an air-containment system surrounding it, Witham said.

So in light of all of this information, don’t you think that the mainstream media should be keeping us better informed about what is really going on out there?

As you read this, the Ft. Calhoun nuclear power plant in Nebraska is completely surrounded by water, and there has been some minor leakage into some of the buildings.

On Sunday, the swelling Missouri River surged past a 2000 foot inflatable berm.  Approximately 2 feet of water rapidly surrounded all of the buildings at the facility.

The Nuclear Regulatory Commission insists that there is nothing to worry about, but it is also being reported that flood waters are literally “at the door” of the primary buildings.

Yes, this is not going to be another Fukushima, but it is a very, very serious situation.  The American people deserve to be told about what is happening.

In a recent article about the Ft. Calhoun disaster, Michael Wolf raised some very interesting questions about what is going on at Ft. Calhoun….

The government is telling us not to panic. All is under control, just like in Japan. But here are a few troubling inconsistencies. One, the Red Cross shelter next to the Fort Calhoun plant has been closed. They claim it was due to “decreased need.” During a flood? Now there is a no-fly zone around the plant. Then there is the disturbing news that the spent fuel rod pool was so full that they store the surplus fuel rods in a dry storage area outside the safety of the pool. How long will that area stay dry and what happens if it gets wet? One reporter claims the dry storage bunker is now half-submerged. One of the intake structures is prone to flooding that could affect the water pumps. Non-functional water pumps? Does that sound familiar?

The few news reports that we have gotten out of the area have been more than a little alarming….

Sadly, most Americans don’t know anything about Ft. Calhoun because the mainstream media has been largely ignoring this story.

Of course the ongoing saga at Fukushima is one of the biggest news stories of this century.  Most analysts are finally acknowledging that this is the worst nuclear disaster in history.  The disaster at Fukushima will be seriously affecting our environment and the health of millions of people for decades to come.

More bad news is continually pouring out of the region.  For example, did you know that large numbers of people living in northern Japan now have radioactive urine?

More than 3 millisieverts of radiation has been measured in the urine of people living 30 to 40 kilometers away from Fukushima.

How would you feel if that happened to you?

Very, very high radiation levels continue to be detected all around Fukushima.  For example, check out what an article in the Telegraph recently had to say about the level of radiation that was found in the water in one trench near the facility….

The water seeping into a trench outside the Number two reactor at Fukushima Daiichi nuclear plant in northeast Japan had a radiation level of more than 1,000 millisieverts per hour.

Such a high level can cause temporary radiation sickness including nausea and vomiting and far exceeds the 100 millisievert per hour which is generally regarded the lowest amount at which cancer risks are apparent.

How many people in Japan (and around the world) are going to end up developing cancer as a result of this disaster?  The truth is that we will probably never know the full health toll.

Radiation meters are now being handed out to approximately 34,000 children that live near Fukushima.

Shouldn’t this have been done about 3 months ago?

The way that the Japanese authorities have handled Fukushima has been a complete and total nightmare.  We may never know the full truth about what has been going on.

But what we do know is that Fukushima is now the worst nuclear disaster in history.  Just check out the following excerpt from a recent article by Stephen C. Jones….

By way of comparison, the Chernobyl nuclear disaster that occured in 1986 in the Ukraine, Russia- heretofore the worst nuclear disaster on record- burned for 10 days and cumulatively killed an estimated 1 million people worldwide. The Fukushima, Japan nuclear disaster has 5 nuclear reactors burning, 2 in partial meltdown and 3 in full meltdown- and they’ve ALL been uncontrollably burning since March 11th. Its been over 3 months and this nuclear disaster remains completely out of control. In fact, some industry estimates cite the possibility that these meltdowns will be contained (optimistically) in 1-3 years, at the very earliest.

Sadly, our politicians and those that control the media apparently believe that it is better for us “not to panic” than to receive the truth.

So what do you think?  Please feel free to leave a comment with your opinion below….