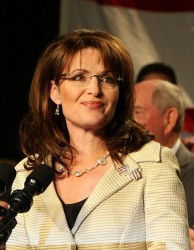 In the United States today, perhaps only Barack Obama is more of a polarizing political figure than Sarah Palin is.  When it comes to Sarah Palin, the vast majority of Americans seem to either absolutely love her or absolutely hate her.  Unfortunately, the number of Americans that can’t stand her seems to be increasing, and this is really bad news for Palin as she considers making a run for the White House in 2012.  A staggering 59 percent of the respondents to a recent Washington Post/ABC News poll said that they would not even consider voting for Sarah Palin in 2012.  The same poll found that just 8 percent of registered voters said that they would “definitely” vote for Palin and 31 percent of registered voters said that they would possibly consider voting for Palin.  Those are really, really dismal numbers.  Sarah Palin has tried to cast herself as the leader of the Tea Party movement, but right now it is just not working.  In fact, it seems that Palin can’t do much of anything right lately.  At one time Sarah Palin was considered the clear front-runner for the Republican nomination in 2012, but now all that is ancient history.

But this is a time when Palin should be at her strongest.  The Republicans dominated the election back in November and several dozen Tea Party candidates were sent to Washington D.C.

Unfortunately, all of the recent polls and surveys that have been taken recently show that support for Palin is rapidly diminishing….

*According to a new CNN poll, 56 percent of Americans view Sarah Palin unfavorably.  Not only that, but the number of independent voters that view Palin unfavorably has risen by 14 percent in just the last few months.

*Other polls are even more ominous.  A recent NBC/Wall Street Journal poll found that Sarah Palin is trailing Barack Obama by 22 points.

Other polls have shown Sarah Palin doing a little bit better in Iowa, but everyone agrees that she has a huge image problem at this point.

So exactly what is the problem?  Well, part of the problem is that Sarah Palin literally seems to be everywhere.  On CNN, Fox News and MSNBC, it seems like they are constantly talking about Sarah Palin all night, every night.  In fact, Sarah Palin is a “regular contributor” on Fox News and whenever one of their shows needs a “rating boost” they just bring Sarah Palin on.

All the major newspapers run stories about her at least a couple of times a week.  She regularly gets far more Internet searches than any other Republican politician.

Her daughter was recently on Dancing with the Stars and a reality show featuring her life in Alaska on TLC recently wrapped up.

So why is everyone talking about her so much?

Well, she is far more “interesting” than most of the other Republican candidates.  Guys like Huckabee and Romney are downright boring.  The media needs someone to be a “star” for the Republicans and Palin fits the bill.

But the bad news for Palin is that all of this overexposure is magnifying all of her flaws and her poll numbers just keep dropping.

Every time something big happens, the media waits to see what Sarah Palin is going to say.  Unfortunately, she is not very good on her feet, and she has a dismal team of advisers around her, and the result is that she keeps putting her foot in her mouth over and over and over.

So Sarah Palin has tried to cast herself as the “anti-establishment” Tea Party candidate.  The only problem is that over and over and over she has been alienating libertarians, and that is a huge problem because libertarians are a core component of the Tea Party movement.

Yes, Sarah Palin still has a small core of very enthusiastic supporters, but it is going to take far more than that to win the White House in 2012.  If Sarah Palin continues on the same path that she is currently on, she doesn’t have a prayer of even getting the Republican nomination, much less actually defeating Barack Obama in the general election.

Right now Sarah Palin is trying to pitch a tired, worn-out neocon establishment Republican message to a Tea Party movement that is made up increasingly of libertarians and anti-establishment conservatives.  It makes for entertaining subject matter on the evening news, but it is not a winning formula.  Sarah Palin can make all of the videos about the greatness of the Tea Party movement (such as the one below) that she wants, but until she wakes up to what the American people really desire (liberty, freedom and a return to the U.S. Constitution) her candidacy is going to be dead in the water….

So considering how bad the poll numbers are right now, is Sarah Palin actually going to run for president in 2012?

Well, for the moment she is enjoying teasing the media, but we all know that she wants to run.

Perhaps the only thing that will stop her from running is if it becomes clear that she has no way of winning.

Palin probably realizes that 2012 is the only shot she will ever have, so if she believes that there is even a slight chance that she can win she will probably go for it.

Recently, when Palin was asked if she was going to run in 2012, she responded by stating that she was giving it “prayerful consideration” and that a final decision will not be made for “some months”.

Well, whether you love Sarah Palin or you hate Sarah Palin, one thing seems to be clear at this point.  Unless Sarah Palin fundamentally changes her approach and message, there is no way in the world that she has even the slimmest chance of winning in 2012.

So, what do all of you readers think of Sarah Palin’s chances in 2012?  Do any of you believe that she can still be a viable candidate by the time election season rolls around?