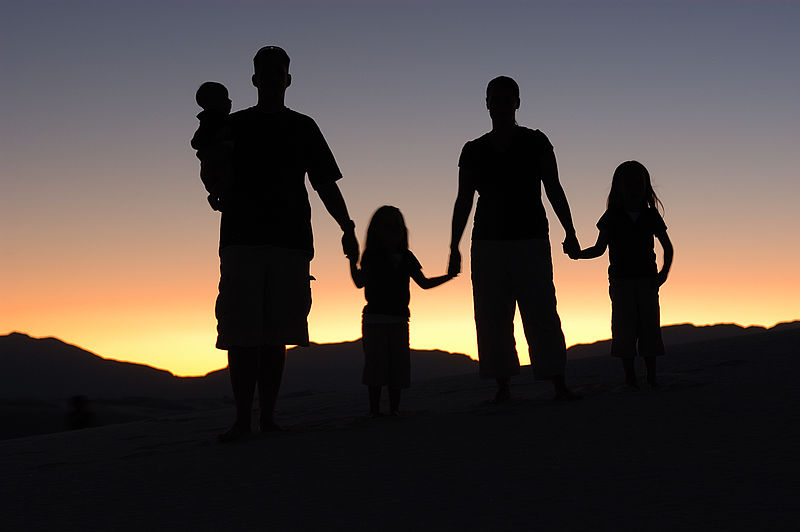 It is hard to believe, but in America today only 46 percent of children live in a home that has both a mother and a father that are in their first marriage.  An additional 15 percent live in a home that has two parents where at least one of them has been remarried.  But that means that an all-time record high 39 percent of all U.S. kids are living in a home with either just a single parent or no parents at all.  These numbers were just released by Pew Research, and they are rather startling.  The “traditional family” that most of us took for granted growing up is dying.  More Americans than ever are delaying marriage, having children out of wedlock and rejecting the traditional family structure.  But is this good for our kids?  Is this good for the future of America?

The decay of the traditional family structure in the United States is something that has been going on for a very long time.  According to Pew Research, the percentage of American children living in a traditional family home has plummeted by 27 percent since 1960…

Less than half (46%) of U.S. kids younger than 18 years of age are living in a home with two married heterosexual parents in their first marriage. This is a marked change from 1960, when 73% of children fit this description, and 1980, when 61% did, according to a Pew Research Center analysis of recently-released American Community Survey (ACS) and Decennial Census data.

The primary reason for this change is the fact that attitudes toward sex, marriage and child rearing in this country have dramatically changed since then…

Americans are delaying marriage, and more may be foregoing the institution altogether. At the same time, the share of children born outside of marriage now stands at 41%, up from just 5% in 1960.

Once upon a time, marriage was held in high honor, our young people were taught to look forward to being parents, and there was something sacred about sex.

But these days sex has become a national sport and our young people are trained that marriage should be put off for as long as possible and that having kids is a burden.

As a result, single Americans now make up more than half the U.S. population for the first time ever, and approximately one out of every three children in the United States lives in a home without a father.

When sex becomes a sport, it is inevitable that many people start behaving like animals that are only concerned with their own personal pleasure.  This includes even some of the most “respectable” members of the community like doctors.  For example, check out what one doctor down in Florida has been charged with doing…

A Florida doctor has been accused of repeatedly drugging at least three female patients with cocaine and sedatives and sexually assaulting them.

Dr Daniel McBath, an osteopath from Dade City had his license restricted by the state last week for ‘egregious and predatory’ behavior involving three women.

In a normal society, something like that would be a national scandal.  But since we are bombarded with news stories like this every single day, it hardly made a blip on the news.

Meanwhile, the idea of having children has become greatly undesirable to large numbers of our young people.  Kids are considered by many to be financial burdens that destroy our “freedom” to have fun and enjoy our lives.

And this terrible attitude manifests itself in the way that many of our young people are treating their young children.

For instance, in one recent article I discussed a case down in Florida where a man and his wife stuffed themselves full of food at a Golden Corral while their four pound baby girl died from starvation in her car seat outside the restaurant.

In another extremely disturbing incident down in Florida, one father recently threw his five-year-old girl off a 60 foot bridge…

The father of a five-year-old girl who was thrown to her death off a 60-foot bridge in Tampa Bay has been charged with murder.

John Jonchuck Jr, 25, was arrested half an hour after a man was seen speeding towards a bridge and throwing a child 60ft into the water on Wednesday night.

Rescuers found Phoebe Jonchuk 40 minutes later but she could not be resuscitated.

Of course not all parents are like that.  Most are trying to do the best that they can.

But overall, our increasing rejection of the traditional family structure is putting a lot of financial strain on those that are raising children.  This is especially true of single mothers.  If you are a child and you do not live with two parents, you are far, far more likely to be living in poverty.   Just check out the following numbers which I originally shared in a previous article…

#1 The National Center for Children in Poverty says that 45 percent of all U.S. children belong to low income families.

#2 According to a Census Bureau report that was released just this week, 65 percent of all children in America are living in a home that receives some form of aid from the federal government…

“Almost two-thirds (65 percent) of children,” said the Census Bureau, “lived in households that participated in at least one or more of the following government aid programs: Temporary Assistance for Needy Families (TANF), the Supplemental Nutrition Assistance Program (SNAP), the Special Supplemental Nutrition Program for Women, Infants, and Children (WIC), Medicaid, and the National School Lunch Program.”

#3 According to a report recently released by UNICEF, almost one-third of all children in this country “live in households with an income below 60 percent of the national median income”.

#4 When it comes to child poverty, the United States ranks 36th out of the 41 “wealthy nations” that UNICEF looked at.

#5 An astounding 45 percent of all African-American children in America live in areas of “concentrated poverty”.

#6 40.9 percent of all children in the United States that are living with only one parent are living in poverty.

#8 It is hard to believe, but right now 49 million Americans are dealing with food insecurity.

#9 According to a report that was released last month by the National Center on Family Homelessness, the number of homeless children in the United States has reached a new all-time high of 2.5 million.

For much more, you can read the remainder of that article right here.

As you can see, our rejection of the traditional family structure is hurting the kids the most.

But what is causing Americans to increasingly turn their backs on the traditional family structure?

Reverend Franklin Graham thinks that he knows the answer…

Reverend Franklin Graham, son of world renowned evangelical preacher Billy Graham, said that America is increasingly embracing a “culture of death” that echoes what has occurred in Europe, and which stems from a “sinful, godless worldview that rejects Christ.”

A further problem in America, he added, is that “Christianity is constantly under siege from the halls of government and education, which seek to suppress any public expressions of faith.”

So what do you think is causing this?

And what do you think that all of this means for the future of America?