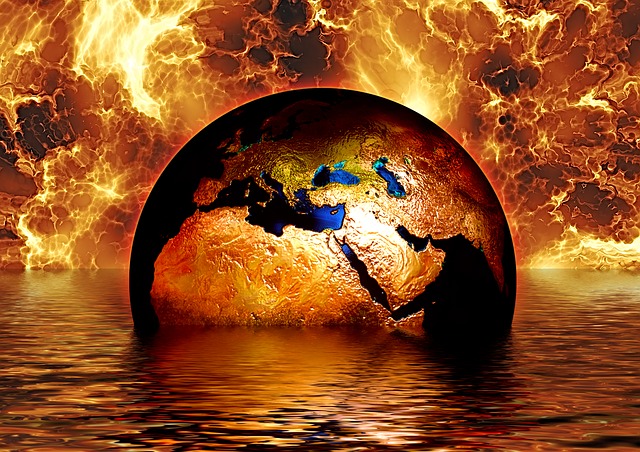 Something strange is happening to our planet.  Over the past 30 days, there seems to have been much more “shaking” than normal, and this is particularly true along the Ring of Fire.  This afternoon I visited the official website of the U.S. Geological Survey, and I discovered that Chile had been hit with 12 major earthquakes within the last 24 hours alone.  The smallest was of magnitude 4.4, and the two largest both measured magnitude 6.9.  We have also seen dozens of volcanoes erupt recently, including the incredibly dangerous Mt. Popocatepetl in Mexico.  Fortunately we have not seen a major disaster that kills thousands of people yet, but many believe that all of this shaking is leading up to one.  In addition, the weather all over the world continues to get freakier and freakier.  Just today, Yemen was hit by a second major tropical cyclone in less than a week.  Any one of these strange disasters in isolation may not seem like that big of a deal, but when you start putting all of the pieces together it starts to become clear that something really significant is taking place.

So why are all of these things happening?  Well, some experts point to the sun.  In recent years there has been a tremendous amount of hype about “global warming”, but the truth is that evidence is starting to emerge that indicates that our sun might be heading into a period of “hibernation”…

The sun will go into “hibernation” mode around 2030, and it has already started to get sleepy. At the Royal Astronomical Society’s annual meeting in July, Professor Valentina Zharkova of Northumbria University in the UK confirmed it – the sun will begin its Maunder Minimum (Grand Solar Minimum) in 15 years. Other scientists had suggested years ago that this change was imminent, but Zharkova’s model is said to have near-perfect accuracy.

And what did we see last winter?  It was a very cold, bitter winter that set new all-time records all over the planet.  Here is more from that same article…

Solar cycle 24 – two cycles prior the cycle that’s expected to bottom out into a Maunder Minimum – was weak. In 2013-14 it reached its maximum far below average. Meanwhile extreme cold-weather anomalies have occurred around the world. Last year “polar vortices” slammed into the central US and Siberia as a third hovered over the Atlantic. All 50 US states, including Hawaii, had temperatures below freezing for the first time in recorded history. Snowfall records were broken in cities in the US, Canada, Italy, New Zealand, Australia, Japan and elsewhere. Southern American states and central Mexico, where snow is rare, got heavy snow, as did the Middle East.

This past summer the cold didn’t let up, with more temperature records across the US and rare summer snows seen in Canada, the US and China. Birds have migrated early in the last two years. Antarctic sea ice set a new record in 2013 and it was broken again in 2014.

Will this upcoming winter be similar?

Should we be anticipating a lot of cold and a lot of snow?

I have been watching stories like this for a couple of years.  Our sun has begun to behave very erratically, and yet very few people are paying attention.  But without the sun, life on earth would not be possible.  So the fact that the giant ball of fire that we revolve around is starting to act very strangely should be a huge news story.

And this is not something that scientists have just started noticing.  This has been going on for quite some time.  For example, the following is from a BBC article that was published last year…

Another thing that many scientists are watching closely is the possibility of a magnetic pole shift.  This has become such a concern that even scientists at NASA are talking about it.  A major news source in the UK recently published an article entitled “NASA: Earth’s magnetic poles are ‘switching’ with catastrophic consequences for humanity“, and the following was the most fascinating part of the story for me personally…

Bruce Jakosky, MAVEN principal investigator at the University of Colorado, Boulder, said when the switch does take place, the Earth’s magnetic field which prevents the Sun’s dangerous radiation getting through, would be neutralised for around 200 years.

He revealed the detail during an historic announcement about how Mars lost 99% of its atmosphere and its oceans that could have housed early life.

Mr Jakosky explained that Mars had been blasted by solar winds, which had stripped it of its atmosphere, for billions of years since the beginnings of our solar system.

He said: “When the polar shift happens the Earth will have no magnetic field for about 200 years.”

During that time the Sun’s solar blasts are expected to strip away at our atmosphere as they did on Mars billions of years ago.

How could humanity possibly survive if “the Earth will have no magnetic field” for 200 years?

Perhaps some would survive by living in underground facilities shielded from the sun.  But certainly most of humanity simply would not make it.

Meanwhile, as I have written about previously, scientists tell us that the entire universe is “slowly dying“.  Apparently the universe is only producing about half as much energy as it once did, and over time the level of energy being produced continues to fade.

Most of us just take for granted that our planet, our sun and our universe will remain stable and behave normally.

But what if we have entered a time when things start to change dramatically?

What if the years ahead are filled with earth changes of a magnitude that most of us cannot even possibly imagine?

What will that mean for our society and for the future of humanity?