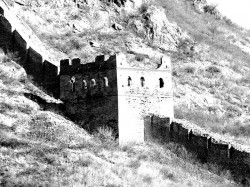 When I was young, someone told me the following: “Life is like a coin – you can spend it any way that you want, but you can only spend it once.”  So how are you spending your life?  Are you just “killing time” and watching world events go by or are you actively trying to make a difference?  When your life is over, will you be proud of the legacy that you have left, or will you be ashamed of what you have done with the time that you were given?  None of us can go back now and change what we have done in the past, but the future stands unwritten before us.  The remaining chapters of your life can be a beautiful thing – but only if you are courageous enough to seize the day.  One way that you can make a difference in this world is by being a watchman.  So exactly is a watchman?  Well, in the ancient world they did not have any of the modern forms of communication that we take for granted today, so the only way a city would know that a threat was approaching would be to post watchmen on the city walls.  A watchman would stand at his post for endless hours, watching intently for any threats that might be headed for the city.  If the watchman did spot something troubling on the horizon it was his job to sound the alarm – thus buying the residents of the city precious time to prepare.  If the watchman did his job correctly, it could potentially deliver the city from total disaster and literally save the lives of thousands upon thousands of people.

Our founding fathers were watchmen.  The founders relentlessly warned their countrymen about the dangers of British tyranny, and when the time came they rallied them together to oppose it.

Well, on the night of April 18th at about 11 PM two lanterns were held up in the Old North Church and Paul Revere began his famous “midnight ride” throughout the countryside to warn his countrymen what was taking place.  Well over 200 years later we are still talking about his bravery.

If you had lived back then, would you have just accepted that British tyranny was inevitable, or would you have risked life and limb to be a watchman for the cause of freedom?

The truth is that the road to greatness is rarely easy.  Just think about all of the men and women that we think of as being “great”.

Did they face great odds?

Was it easy for them to accomplish what they were trying to do?

Was the “establishment” fighting their efforts every step of the way?

The “easy road” may seem more pleasant, but it is not a path that will bring you meaning and purpose in life.

What if there was more to life than what you have been programmed to accept?

What if instead of watching the news you could actually make the news?

What if you could leave a great legacy that will actually be remembered instead of fading away as just another nameless, faceless nobody that never really tried to make a difference?

The truth is that you and I live during one of the most extraordinary times in human history.

Today it seems like more happens in a single week than used to happen in an entire year.  The pace of change continues to accelerate, and it seems as though history is building toward some sort of crescendo.

If you are a student of history, then you know that this is an incredible time to be alive.  Personally, I am convinced that this will be one of the most talked about eras in all of human history.

So do you want to wake up and actually do something during this extraordinary time, or do you want to remain “comfortably numb” serving the system and pumping as much entertainment as possible into your brain?

Are you just going to sit there while our liberties and our freedoms are taken from us?

Are you just going to sit there while evil grows?

Or are you going to do something?

So will you be a watchman that warns others what is coming and that rallies them to action?

Will you tell others about the economic collapse that is on the horizon so that they can have time to prepare themselves and their families for what is coming?

Will you try to educate others about how our financial system really works and about how debt is destroying all of the wealth that has been handed down to us?

Will you cry out as the moral decay that is running rampant wherever you look literally rips this country apart?

Will you point out the horrific corruption in Washington D.C. and on Wall Street so that the American people can wake up and demand change?

Will you speak out about the emerging Big Brother police state control grid, or are you just going to sit idly by as all of our constitutional freedoms are ripped out of our hands?

Will you tell your countrymen how we are literally being poisoned by what we eat, by what we drink and by what we breathe?

Will you educate those around you about the dangers of genetically-modified organisms or are you just content to watch the beautiful world we have been given turned into a very toxic place full of freakishly bizarre creatures?

Will you work to expose the lies that are being passed off as “truth” by the mainstream media and our education system, or will you just “go with the flow”?

Will you attempt to alert your fellow Americans about the betrayal of our national sovereignty, or are you not really concerned if there will even be a place called “America” when your children get to be your age?

Will you seek to be a force for love in a world that is becoming more cold-hearted and hateful by the day?

When the world financial system collapses, will your first impulse be to hurt someone or to love and help someone?

When things start falling apart all around you, are you going to be a leader or a whiner?

Are you strong enough to love your enemies?

Will you do what you know is right even when it seems like the entire world is trying to get you to go in another direction?

Are you willing to be a light in the darkness?

Are you willing to be a servant to others that they may live?

Are you willing to seek the truth even when the truth is extremely inconvenient and extremely uncomfortable?

It is time to wake up.

You can have a life full of meaning and purpose if you are willing to open your eyes to what is real.

Have you ever had something to really live for?

Well, try being a watchman for a while – you might just be surprised how your life will change.

So will everyone listen to you when you try to warn them?

In fact, a whole lot of people might decide that you are completely nuts.

In the end, you could end up saving the lives of thousands of people.

You could also end up giving thousands of people something to live for.

There are some people that have been watchmen for many years.  In fact, if I just mention names such as “Alex” and “Steve” many of you instantly know who I am talking about.

But in the end, being a watchman is not about fame or fortune.  It is about doing what is right and making a real difference in the world.

It is about being a force for good in a world that is becoming more evil by the day.  It is about standing up to the darkness and declaring that you are not afraid.

So if you want to be a watchman, how do you do it?

Well, you just start where you are.

The truth is that there are thousands of ways to be a watchman.  Nobody has the ability (or the time) to do it all.

But all of us, in our own small ways, can make a difference.

Will you make a difference?