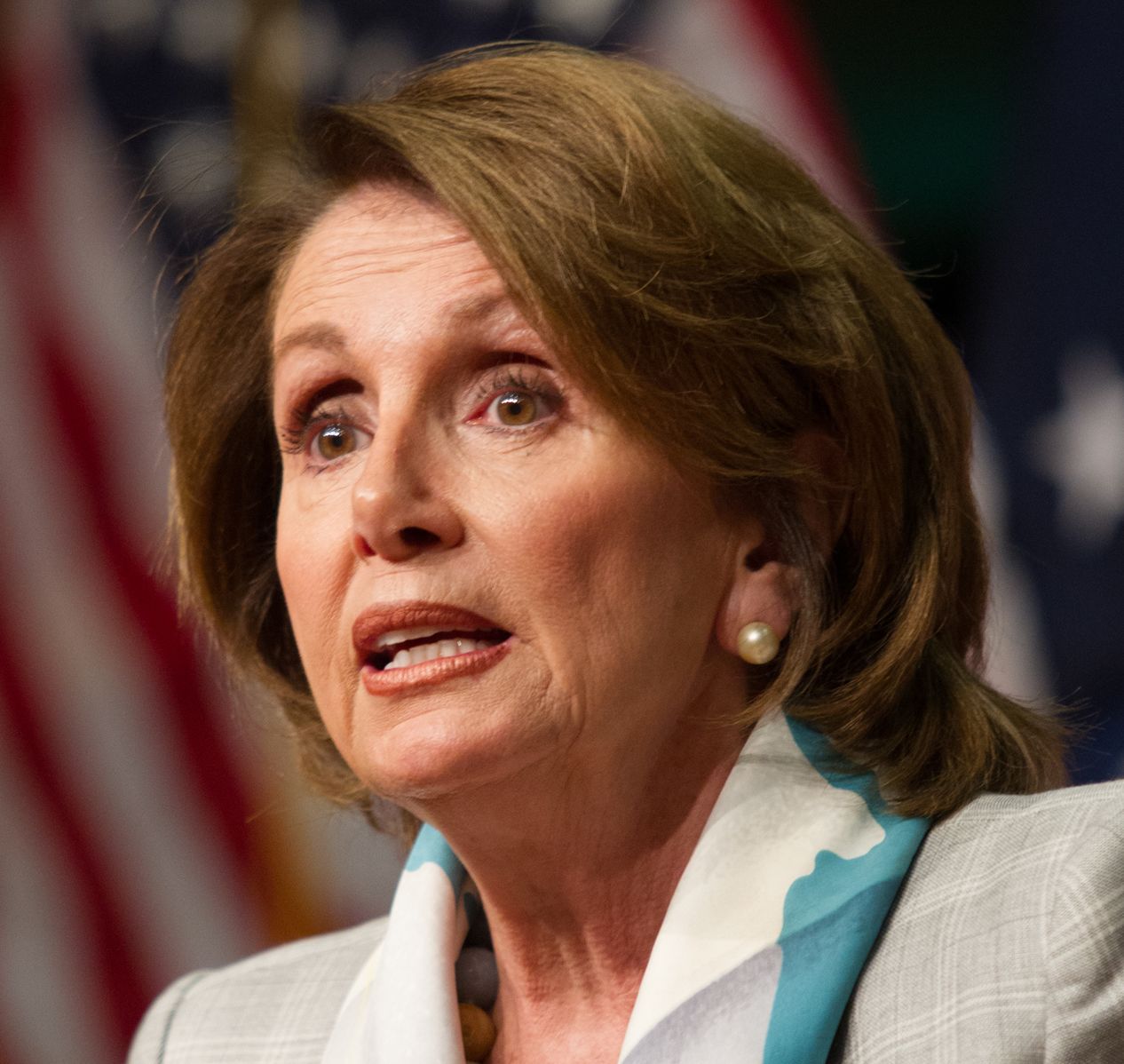 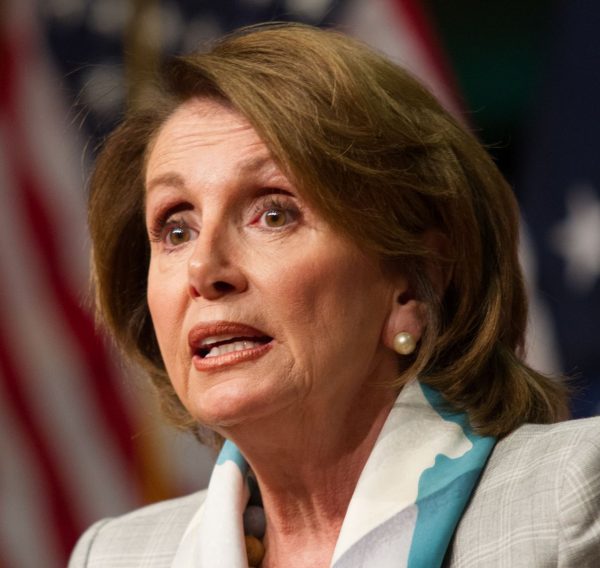 President Trump has done it again.  Less than 24 hours after House Speaker Nancy Pelosi essentially “disinvited” him from delivering the State of the Union address on January 29th, President Trump delivered a power move that we will be talking about forever.  Just minutes before a congressional delegation including Pelosi was scheduled to leave on a seven day trip to the Middle East, Trump abruptly canceled the Air Force flight that they were supposed to be riding on.  Top Democratic lawmakers were literally sitting on the bus that was to take them to the plane when they found out about the news.  Needless to say, they were absolutely enraged, and they began furiously working their phones in order to find a solution.  But of course Trump would not relent, and everybody in the entire country is talking about this epic troll move.  In fact, even CNN is admitting that Donald Trump “dunked” on Nancy Pelosi.

In his letter to Pelosi explaining this cancellation, Trump told her that if she wanted to fly commercial instead of taking an Air Force jet that would “be your prerogative”.  The following comes from Fox News…

“Due to the Shutdown, I am sorry to inform you that your trip to Brussels, Egypt, and Afghanistan has been postponed. We will reschedule this seven-day excursion when the Shutdown is over. In light of the 800,000 great American workers not receiving pay, I am sure you would agree that postponing this public relations event is totally appropriate,” Trump wrote.

“I also feel that, during this period, it would be better if you were in Washington negotiating with me and joining the Strong Border Security movement to end the Shutdown. Obviously, if you would like to make your journey by flying commercial, that would certainly be your prerogative.” 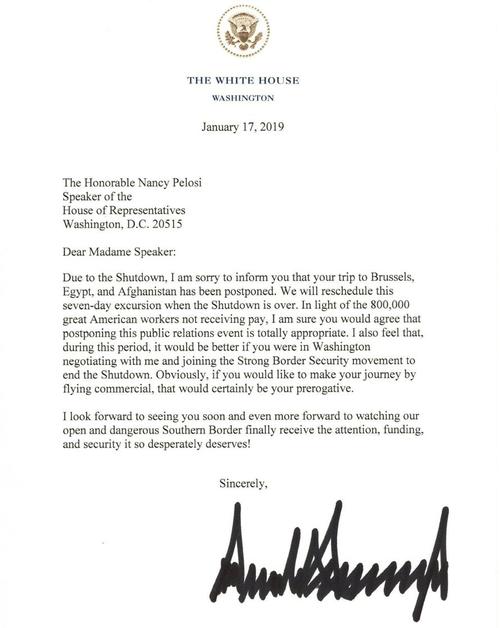 Members of Congress were literally sitting on the bus waiting to go when they received this letter, and Chad Pergram reported that “furious calls” were going back and forth in a desperate attempt to salvage the trip…

Members are sitting on the USAF bus on CapHill they wait to see if they are departing on overseas trip Trump canceled. Fox is told there are furious calls going back and forth now between the Hill, State, Pentagon and White House.

As the stunned Democrats tried to figure out what to do, the Air Force bus began circling the U.S. Capitol in an attempt to keep away from pesky reporters.

But of course eventually it become clear that Trump would not move, and the bus returned to the U.S. Capitol and the highly embarrassed lawmakers got off and went back inside…

The stunned officials were trying to understand whether their trip really was canceled. Phone calls and messages were flying between those on the bus and officials inside the Capitol, according to aides.

Suddenly, the bus started rolling to the Senate side of the Capitol. It left the Capitol complex and drove slowly in front of the Supreme Court.

Less than five minutes later, the bus was in front of the House chamber again, stunning the jacket-less reporters, photographers and camera operators who were almost sweating in 35-degree weather chasing after the bus. The lawmakers eventually got off the bus but wouldn’t comment extensively on the situation.

Needless to say, things are getting personal now.

After disembarking from the bus, Democrat Adam Schiff told reporters that this kind of thing “has never happened in the annals of congressional history”…

“This is obviously an action directed at the speaker,” Schiff told reporters after exiting the bus. “And we think, as far as we can tell, this has never happened in the annals of congressional history.”

Donald Trump has always said that when people hit him, he always hits back harder.

And on Thursday he delivered an “epic troll move” that is going to be difficult to top.  We will be talking about Nancy Pelosi’s “bus to nowhere” for a very, very long time.

But this was not just an arbitrary decision by Trump.  Because of the government shutdown, he also canceled his trip to the World Economic Forum…

“Out of consideration for the 800,000 great American workers not receiving pay and to ensure his team can assist as needed, President Trump has canceled his Delegation’s trip to the World Economic Forum in Davos, Switzerland,” press secretary Sarah Sanders said in a late Thursday statement.

After Thursday, the odds of a compromise between President Trump and the Democrats went way, way down.

Nancy Pelosi embarrassed Trump when she “disinvited” him from delivering the State of the Union address, and now President Trump has deeply embarrassed Nancy Pelosi by canceling her Middle East tour at the last moment.

Both sides are going to continue to hammer one another, and it is clear that Trump could use some more friends in Washington.  Unfortunately, we are likely to have endless gridlock in D.C. for the next two years, and at this point neither side appears to have a strong incentive to end the government shutdown…

Pelosi sees a Democratic base that is entirely uninterested in giving Trump his border wall and a series of national polls that suggest the public blames the President and his party more than congressional Democrats for the ongoing shutdown. Combine those two factors, and Pelosi has zero incentive to give in to Trump.

Trump, of course, has made a political career of doing just this — smashing through normal behavior, acting impulsively and impetuously, taking his ball and going home when he doesn’t get exactly what he wants. If Pelosi’s political calculations make her unlikely to take the high road any time soon, Trump’s personality doesn’t even allow him to see that a high road exists.

So this shutdown is likely to keep on going for an extended period of time, and it has become clear that the battle in Washington has only just begun.