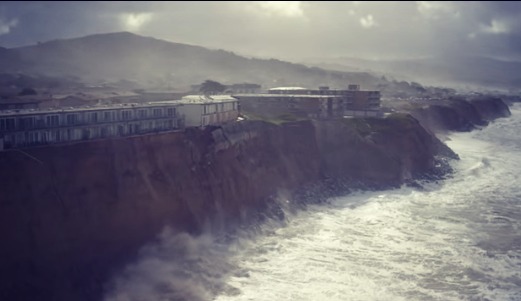 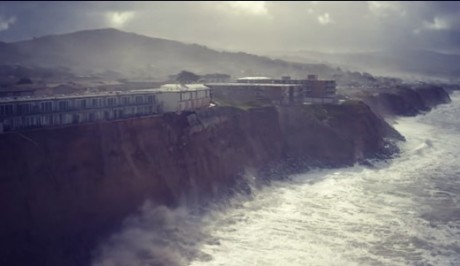 Why would anyone want to live in the state of California at this point?  Not only do you have to deal with unbearable traffic, insane politicians and unchecked illegal immigration, but now the weather itself seems to be going crazy.  A very strong El Nino has been sending destructive storm after destructive storm barreling into the west coast, and this is causing tremendous flooding, dangerous landslides and unprecedented erosion in coastal communities all over the state.  As I mentioned the other day, a state of emergency has just been declared in the coastal city of Pacifica due to the incredible amount of erosion that is happening there.  Now, incredible footage has been released that actually shows the coastline crumbling.  Small parts of California really are falling into the ocean, and meteorologists are warning that the worst may be yet to come.

When I was younger, I always dreamed of owning a home on a cliff overlooking the ocean.  It was part of my “California dream”, but now that dream is turning into a nightmare for many that live along the California coast.  In Pacifica, many homes that directly overlook the ocean are being hastily evacuated due to the extreme erosion caused by these storms…

Several homes and apartment complexes in Pacifica, California, have been deemed uninhabitable due to rapidly eroding cliffsides creeping closer to the dwellings.

The residences, just a few miles from San Francisco, are teetering on the edge of the cliffs and most have already lost their backyards to erosion blamed on storms from El Niño, authorities said.

Pacifica city officials have declared a state of emergency and have asked residents of three apartment complexes to evacuate. The most recent evacuation came Monday, with 20 residents being told to leave.

You can view some stunning footage of this erosion right here.  At this point some of the apartments are in so much danger that the police are actually forcing people out of their homes.  The following comes from Fox News…

Police fanned out to post yellow tags on 20 apartment doors, giving residents access to move their belongings out.

“That’s scary,” Pacifica Police Chief Daniel Steidle told KTVU, referring to the eroding cliffs out the apartment windows. “I wouldn’t want to be in those buildings right now. It’s very scary to look at that.”

But when most people see a headline like I put on this article, what do they think about?

Of course they think about the day when large chunks of the state of California will fall into the ocean due to some sort of major catastrophe.

You probably already know that the coastline of California sits directly on the “Ring of Fire” which runs roughly along the outer perimeter of the Pacific Ocean.  Approximately 81 percent of all large earthquakes occur along the Ring of Fire, and virtually all scientists agree that the state is way overdue for a major quake.

And without a doubt, we have seen activity heat up in almost every other area along the Ring of Fire in recent years.  In fact, there was a 7.1-magnitude earthquake in Alaska just a few days ago.

Even more unsettling is what has been happening just north of the California coast.  A very alarming series of “slow earthquakes” started hitting the Cascadia Subduction Zone beginning on December 22nd…

The tremors are once again on their migration south.

The Pacific Northwest Seismic Network reports hundreds of tremors were reported in the Puget Sound region as recently as Sunday.

Also known as “slow earthquakes,” the tremors are a phenomenon that occur along the Cascadia Subduction Zone every 12-15 months. The latest began Dec. 22, 2015, according to the seismic network. They subsided for a time, but resumed in the past several days.

There are many people that have moved away from the west coast entirely because they are fully convinced that seismic activity will one day cause a catastrophe of unprecedented magnitude.  There are even some that believe that we will actually see large portions of California fall into the ocean.

So what do the scientists say about this?

Most of them tell us that this is impossible, although they do admit that Los Angeles and San Francisco will be directly next to one another someday.  The following comes from the official website of the U.S. Geological Service…

Personally, I expect the shaking of our planet to continue to increase, and I believe that we will eventually see seismic activity on the west coast that will shock the entire world.