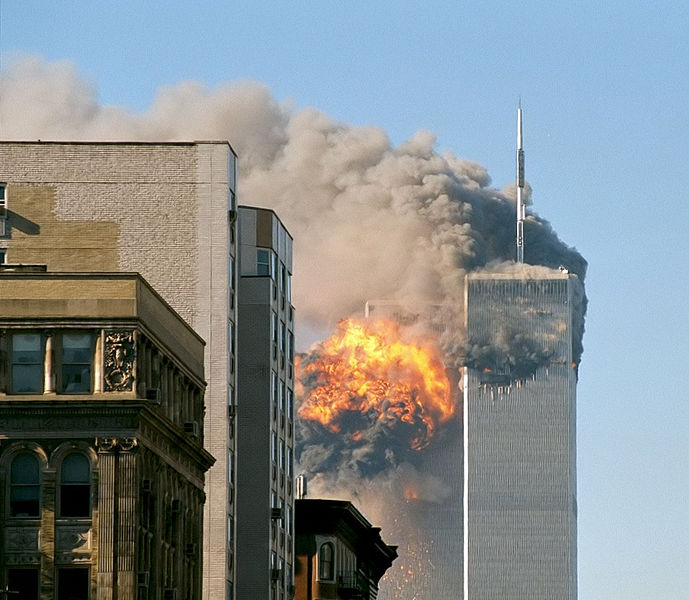 Is it just me, or does our world seem to be getting stranger with each passing day?  As an attorney, I was trained to be level-headed and skeptical, and in my writing I typically stick to facts that I can prove.  But lately, a whole lot of things have been happening that I don’t have any rational explanation for.  Just look at what happened on Thursday.  On the eve of the 14th anniversary of 9/11, a double rainbow appeared over the site where the World Trade Center towers once stood.  We’ll discuss possible meanings of that sign in a moment.  On Friday, a massive bolt of lightning caused a crane to collapse at the Grand Mosque in Mecca in Saudi Arabia.  At least 107 people were killed and at least 238 others were injured.  It turns out that this crane was owned by “the Saudi Binladin Group”.  If that is a coincidence, it is an awfully bizarre one.

The Grand Mosque surrounds the holiest site in all of Islam.  So the fact that photos are circulating all over social media that show “the polished tiled floor of the mosque covered in rubble, bodies and pools of blood, and people fleeing the area bleeding and covered in soot” is a very, very big deal.

Not only did this happen on the anniversary of 9/11, it also took place just before the Hajj is to begin…

The Grand Mosque, or Sacred Mosque, surrounds the Kaaba – the most sacred site in Islam. The cuboid structure made of granite located in the mosque’s center is often called the House of Allah.

The Kaaba is the place of the Hajj – the Islamic pilgrimage to Mecca, which is one of the five Pillars of Islam. It is mandatory of all Muslims physically and financially capable to carry out the journey at least once in a lifetime. The period of Hajj in Mecca is considered to be one of the largest gatherings of people in the world.

And as I mentioned above, the crane that collapsed just happened to belong to “the Saudi Binladin Group”…

The project to expand the mosque was launched in 2011 by late King Abdullah bin Abdulaziz. Earlier in 2015, King Salman bin Abdulaziz added five construction projects as part of the mosque’s expansion aiming to accommodate more than 1.6 million worshippers.

The projects cover 1.47 million square meters and include the construction of 78 new gates at ground level, according to the official Saudi Press Agency. The project and is being carried out by the Saudi Binladin Group at an estimated cost of US$26.6 billion, according to local press.

I don’t know what all of this means.

I am just throwing it out there.

Double rainbow fills the sky in New York City ahead of 9/11 anniversary http://t.co/rTDtp2lx0X

There are some that have suggested that it was God’s way of remembering the victims of 9/11 and their families.

Others have suggested that it is a sign of impending judgment.  In the Bible, the rainbow was a sign that God used for his covenant with Noah, and in the book of Revelation we see a rainbow around the throne of God.

Today, we have taken this symbol which belongs to God and we have desecrated it…

So what message is this double rainbow in New York City sending to us?

I’ll let people debate that in the comments section following this article.

Before I bring this piece to an end, I also want to remind everyone that there are tremendous unanswered questions about what actually happened on September 11th, 2001.  As an attorney, I was trained to follow the evidence, and in this case the evidence points to some extremely disturbing conclusions.  The following is an extended excerpt from a previous article that I published…

Even though Americans have been hearing about 9/11 endlessly for the past 12 years, nearly half of them still don’t know that a third building fell on that day.  A 47-story building named “Building 7” collapsed perfectly into its own footprint at freefall speed, but no plane ever hit it.

So why did it fall?

The following is the official ReThink911 video about Building 7…

And of course the collapse of the other two World Trade Center towers would have been impossible as well without the help of controlled demolition.

But for many Americans, the implications of accepting that reality would just be too painful to accept.  It would mean that someone wired those buildings for controlled demolition ahead of time, and for many very patriotic Americans such a notion is absolutely unthinkable.

However, we owe it to future generations of Americans to put our emotions aside and to search out the truth.  Whoever was responsible for the events of 9/11 needs to be brought to justice, no matter who they might be.

And the families of those that were killed on that day deserve to know exactly what happened and why it happened.  The following is an excerpt from a great editorial by Dennis Maley in the Bradenton Times…

For too long, government officials have been able to successfully leverage the emotional components of the tragedy to deflect questions they painted as either disrespectful to the victims and their families or crackpot conspiracies. But with over 2,000 architects and engineers having signed the 9/11 truth petition, most of whom have offered credible and detailed reasons why their expertise has left them at odds with root elements of the official version of events, there remain too many unanswered questions for us to continue to ignore those raising them.

Perhaps the most noted event of that day, in terms of skepticism, is the implausible “collapse” of building seven, the third tower to fall, which reached free-fall speeds and fell in its own footprint in the way that a controlled demolition does – despite the fact that it was not hit by a plane. Building seven’s improbable collapse was not explained by the 9/11 Commission and has been routinely described by demolition experts as something which could have only occurred through a well-planned, coordinated demolition, aided by pre-placed explosives.

The two main towers also fell at near free-fall speeds, with concrete floors being pulverized to dust almost immediately (before the required force would be present) while the necessary deceleration that would be needed to generate the force to continuously penetrate each floor below was obviously absent. Quite simply, a building of that size and structural integrity would not seem capable of falling at such speed, while simultaneously expelling such tremendous energy in obliterating each floor – which was nearly 4-ft. thick and topped with 4 inches of poured concrete above and lined with interlocking steel trusses beneath.

The documented phenomenon of extreme-high temperatures at the twin tower sites, which inexplicably reached levels capable of melting iron and structural steel when a normal open air fire is not capable of reaching such ranges, also warrants a closer look, as does eyewitness accounts of “molten metal.” Iron-laden spheres in residual dust at the site that suggest temperatures had to reach more than 2,700 degrees fahrenheit (the melting point of iron and structural steel) is also suspect. The use of thermite would be one possible explanation, though the pyrotechnic compound was not tested for at the site, a standard protocol when investigating such an explosion.

Why are so many Americans still so resistant to asking such hard questions?

Shouldn’t we allow the evidence to lead us to the truth instead of allowing the government to define what the truth is for us?

Why aren’t there more reporters out there like Ben Swann?

A lot of you out there think that you know exactly what happened on that day and you bought the maintream media’s “official story” hook, line and sinker.

Well, today I think that it is a great time to stop and examine the evidence.  There is an organization of more than 2,000 architects and engineers that claim that the government’s version of what happened on 9/11/2001 is absolutely impossible.  You can learn more about what they have collectively discovered right here.

Some people try to tell us that questioning the official version of events on 9/11 makes us “conspiracy theorists”, but the truth is that the real “conspiracy theory” is the nonsense that our government has been trying to sell us all this time.

Much of what the government says about that day is scientifically impossible.

Someday I hope the truth about what actually happened comes out and is exposed for all to see.

And once the American people discover how badly they have been duped, there is going to be hell to pay.