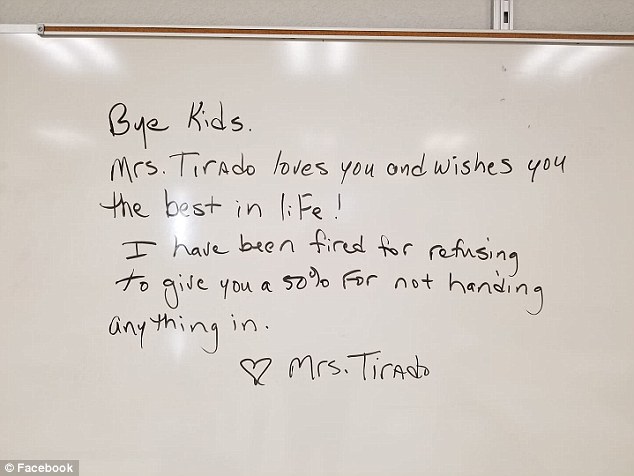 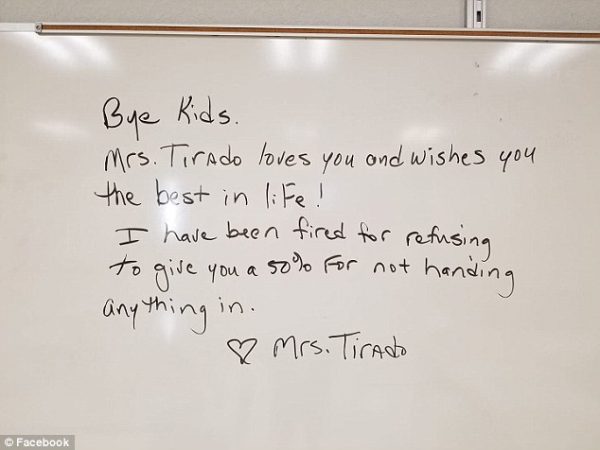 Should students that refuse to turn in their homework receive a grade of 50 percent anyway?  Of course not.  That would be like workers that didn’t show up for work asking for 50 percent of their paychecks.  Our system of education has become a complete and utter joke, and the rest of the world is laughing at us.  Fortunately, there are still a few brave souls that are standing up for what is right.  52-year-old history teacher Diane Tirado was hired by the West Gate K-8 School in Port St Lucie, Florida for this school year, but she was fired when she refused to give students that didn’t turn in anything a 50 percent grade on their assignments.  When Tirado was hired, she was never told that the school has a “no zero” policy.  And when she found out, she refused to go along with it.

Should students get half credit for an assignment they didn’t even turn in? A former St. Lucie County teacher doesn’t think so.

That’s why she wrote a goodbye message to her eighth graders on a white board saying, “Bye Kids, Mrs. Tirado loves you and wishes you the best in life! I have been fired for refusing to give you a 50% for not handing anything in. 💓 Mrs. Tirado”

Many of the students have posted supportive messages on Facebook, and that is very good to see.

And this wasn’t a case where students were not able to complete some homework that had been assigned overnight.  According to Mrs. Tirado, students had been given two weeks to complete their projects…

She assigned an explorer notebook project, which she said she gave students two weeks to complete.

When several students didn’t turn it in, Tirado found out about what she calls a “no zero” policy, which is reflected in the West Gate student and parent handbook. Below the grading rubric, in red lettering, the handbook states “NO ZEROS- LOWEST POSSIBLE GRADE IS 50%”

It would have been really easy for Mrs. Tirado to simply go along with the system, but she is one of those rare souls that is willing to stand up for her standards.

She insists that any grade in her class must be earned, and she explained to WPTV that giving kids grades that they do not deserve is just setting them up for failure once they get out into the real world…

“I’m so upset because we have a nation of kids that are expecting to get paid and live their life just for showing up and it’s not real,” Tirado said.

If we had more teachers like Mrs. Tirado, we would probably be in much better shape as a nation.

Once upon a time, we had the greatest system of education on the entire planet, but now we are rapidly falling behind other developed nations.  I shared the following numbers in a previous article, but I feel like this is a good time to share them again…

After leading the world for decades in 25-34-year-olds with university degrees, the U.S. is now in 12th place. The World Economic Forum ranked the U.S. at 52nd among 139 nations in the quality of its university math and science instruction in 2010.

According to the 2009 National Assessment of Educational Progress, 68% of public school children in the U.S. do not read proficiently by the time they finish third grade. And the U.S. News & World reported that barely 50% of students are ready for college-level reading when they graduate…

What we are doing is clearly not working, and we desperately need more teachers like Mrs. Tirado that are willing to challenge our students.

On a similar note, a woman from North Carolina named Tammie Hedges took the initiative to rescue 27 animals during Hurricane Florence, but once the authorities discovered what she had done they arrested her…

Hedges, a resident of Wayne County, North Carolina, was taken into custody Friday after providing care to more than two dozen animals – 17 cats and 10 dogs – for owners who had to evacuate before the storm hit.

“The owners got to evacuate. They got to save themselves. But who’s going to save those animals? That’s what we did,” Hedges said. “We saved them.”

The owner of Crazy’s Claws N Paws, a donation-based animal rescue center, was in the process of converting a warehouse space into a proper animal shelter when she decided to use the building to help keep pets dry. However, her facility was not legally registered as a shelter.

What in the world is wrong with Wayne County, North Carolina?

Have they literally gone insane?

I am sick and tired of reading about people getting into trouble with the law for doing the right thing.

According to the Facebook page, 18 of the animals were surrendered to Hedges already in very bad shape. No vets were open due to the flood. Was it better to let them suffer or to do what they could to help?

According to the government, Hedges shouldn’t have just let these animals suffer…she should have let them drown in the floodwaters.

I’m sick of having to “ask permission” and pay fees to do the right thing, and I think a lot of other people are too.

We live in a society where evil and corruption are wildly out of control, and yet the control freaks that run things seem to love to come down on those that are just trying to do what is right.

It is hard to be optimistic about a country that will treat people like Tammie Hedges and Diane Tirado in this manner.  Somewhere along the way we lost our common sense, and America is in a massive amount of trouble as a result.