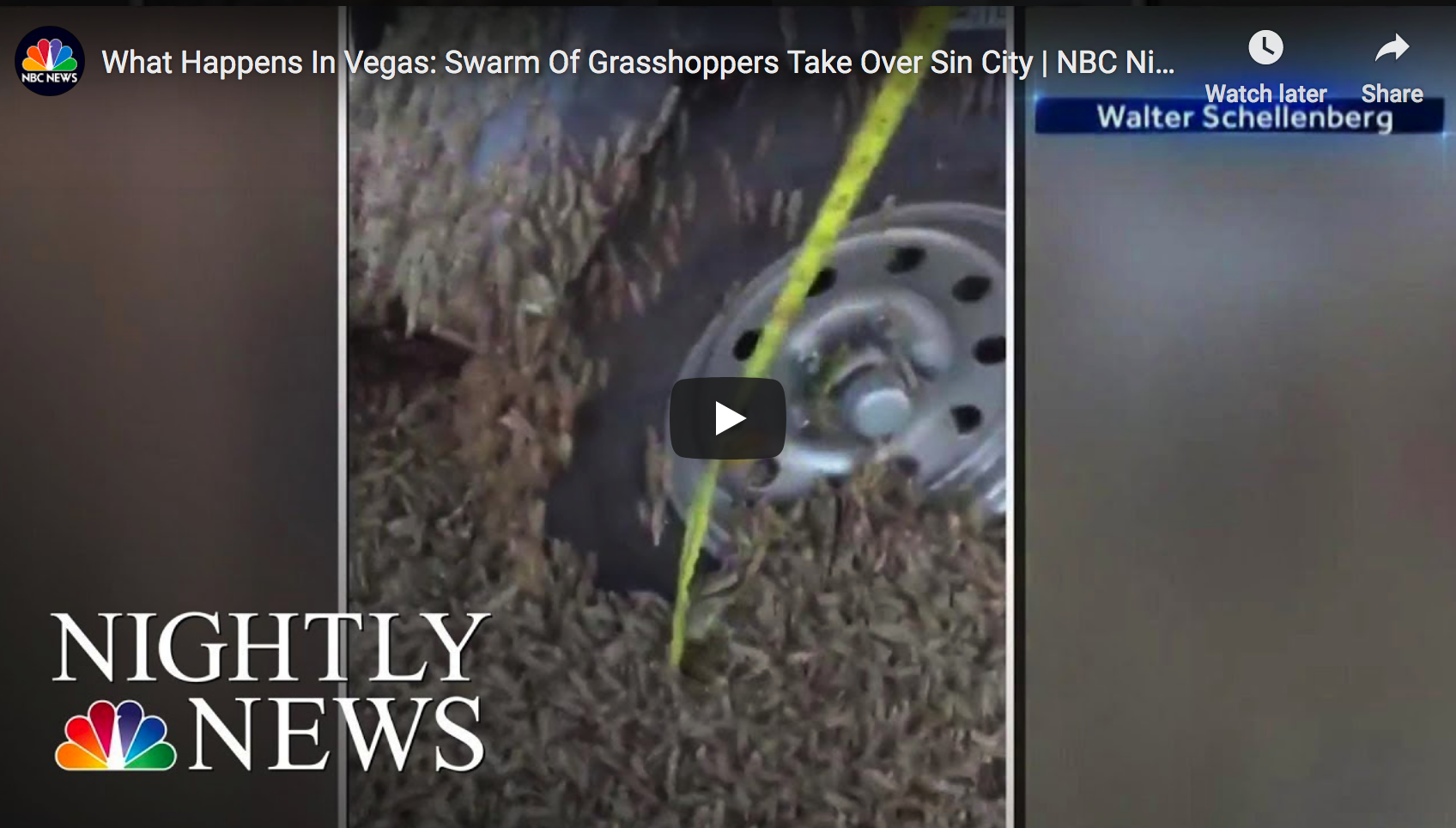 FacebookTwitter
It is being called “the Great Grasshopper Invasion of 2019”, and it is really freaking out a lot of people in Las Vegas, because most of them don’t understand why this is suddenly happening.  Unusually wet weather earlier this year created ideal breeding conditions, and now massive swarms of grasshoppers have descended upon Sin City.  According to AccuWeather, there are “millions” of them, and it is being projected that they will be sticking around “for weeks”.  The experts are assuring us that there is nothing to be concerned about, and that is probably true, but I have never heard of such a thing happening before in modern American history.  According to one report, there are so many grasshoppers that “you can see them from space”, and the swarms are so thick that they “even appeared on weather radar”…

A grasshopper swarm of biblical proportions has descended upon Las Vegas, CNN reports. The invasion is expected to last weeks, and it’s so dense that it has even appeared on weather radar.

The cloud of flying insects is practically indistinguishable from a rainstorm on weather maps. After tracking it for a while, experts noticed that it didn’t move like normal rain patterns, and it didn’t match up with what meteorologists were reporting from the ground. The mysterious mass that had settled over Las Vegas had to be caused by something else.

Of course the “mysterious mass” was a colossal swarm of grasshoppers, and it looks like they plan to stick around for a while.

And things are particularly bad at night in Las Vegas, because as state entomologist Jeff Knight has noted, these grasshoppers are attracted to ultraviolet lights…

“When we have a wet winter or spring, these things build up. A lot of times, when populations get too big, it triggers the insects to move to find new areas,” said Knight.

Knight says the grasshoppers are attracted to ultraviolet lights, making valley gas stations and parking lots popular spots for swarms, which can be bad for business.

“When you have thousands of insects like that, it does create that panic in somebody’s mind,” said Knight.

Needless to say, the Vegas strip is absolutely inundated with grasshoppers at the moment, and in some spots they are so thick that it actually looks like it is snowing outside.

The good news is that these grasshoppers do not pose a threat to humans.  State entomologist Jeff Knight explained to reporters that these insects do not bite and do not carry disease…

However, these grasshoppers are very, very hungry, and so any vegetation will be a target.

According to a local pest control technician, this giant swarm of grasshoppers does have the potential to completely destroy anything that they find growing…

“They are plant feeders so they are notoriously known for wiping out crops. They can destroy gardens, plants, vegetation,” said English.

Of course when most people hear of a giant swarm of flying grasshoppers, they are immediately going to think of the plague of locusts in Exodus chapter 10…

13 So Moses stretched forth his rod over the land of Egypt; then the Lord brought an east wind upon the land all that day and all that night. And when it was morning, the east wind brought the locusts. 14 The locusts went up over all the land of Egypt and settled down in all the territory of Egypt. They were very grievous. Never before had there been such locusts as they, nor would there be such ever again. 15 For they covered the face of the whole earth, so that the land was darkened, and they ate every herb of the land, and all the fruit of the trees which the hail had left. As a result, nothing green remained there in the trees or herbs of the field, through all the land of Egypt.

Needless to say, what Las Vegas is experiencing right now is not anything on that scale.  But it is interesting to note that this is happening in the only U.S. city that has a giant sphinx sitting in front of a giant pyramid that was specifically modeled after the pyramids of Egypt.

In the end, these grasshoppers will go away in a few weeks and everyone will soon forget that this ever happened.

But while it is happening, perhaps it is an opportunity for introspection.  Las Vegas is known as “Sin City” for a reason.  It has become a global symbol for American excess and debauchery, and people from all over the world fly in to Vegas to take part in the world’s largest party.

They say that whatever happens in Vegas stays in Vegas, but that is not actually true.  The degeneracy of our culture has been exported all over the planet, and the moral decay that we see all over the world is getting worse with each passing year.

At some point we need to get off of the self-destructive path that we are currently on, but it is probably going to take a whole lot more than a plague of grasshoppers to make that happen.