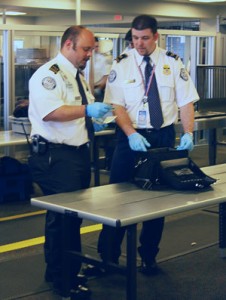 What in the world has happened to America?  This week two elderly women that are more than 80 years old have come forward with claims that they were strip-searched at JFK Airport in New York.  But sadly, this is nothing new.  The truth is that there has been a whole string of incidents involving elderly Americans being strip-searched or sexually molested by TSA agents at U.S. airports. When they told us ten years ago that they were going to “beef up” national security, did you think that it would ever come to this?  One of the ways that a society is judged is by how it treats the most vulnerable members.  Well, instead of honoring our senior citizens, we are treating them like animals.  Is this how we are repaying the debt that we owe them for bringing us into this world and raising us?  The rest of the world is laughing at us.  America is rapidly turning into a totalitarian police state and we have become a global joke.  You won’t find any other country on earth where senior citizens are being strip-searched and sexually molested before they are allowed to get on to their flights.  Not even North Korea does that.  This has got to end, because right now the name of America is being dragged through the mud in front of the whole world.

Does anyone out there believe that living in a “Big Brother” police state is actually going to make us safe?  No matter how extreme “national security” becomes, it will never be possible to stop all threats.  At some point, more bad stuff is going to happen.  It is inevitable.

But meanwhile, we have a choice.  We can live without fear as free men and women or we can give in to paranoia.  Sadly, the United States has chosen to do the latter.

It is entirely possible to have a very high level of security and still respect the honor and dignity of individual citizens at the same time.  But in America, we have chosen to go a different route.  In America, citizens will be treated like absolute scum if someone in the government believes that it will improve “national security” even the tiniest little bit.  As we have seen recently, they just keep pushing “national security” further and further and further.  Meanwhile, our liberties and our freedoms are being systematically destroyed.

Our founders would be absolutely disgusted with us if they could see us today.  We are turning our backs on everything that it means to be American.

I honestly do not know how anyone can defend the stories that you are about to read below.  We are treating our senior citizens like dirt and it has got to stop.

The following are 9 examples of elderly Americans being strip-searched or sexually molested by TSA agents at U.S. airports….

#1 On Saturday, an 85-year-old grandmother from New York made headlines all over the world when she claimed that she was strip-searched at JFK Airport after refusing to go through a body scanner.

Lenore Zimmerman is a frail old lady that only weighs about 110 pounds, but TSA agents treated her like a very serious national security threat.  Apparently they thought that she was so much of a threat that they had to pull down her underwear.

The following description of this incident comes from a recent article in the New York Daily News….

Zimmerman was on her way to a Fort Lauderdale-bound flight when she asked if she could forgo the advance image technology screening equipment, fearing it might interfere with her defibrillator.

“They took me into a private screening room and pulled my pants down and then pulled down my underwear,” the 4-feet-11 Zimmerman said. “If that’s not strip-searching, I don’t know what else you’d call it.”

#2 Now, another elderly woman has come forward and is claiming that she also was strip-searched at JFK.  The following is what 88-year-old Ruth Sherman recently told a CBS affiliate in New York….

From her home in Sunrise, Florida, 88-year-old Ruth Sherman says she knows for a fact senior citizens are being violated at a screening checkpoint at JFK.

“I felt like I was invaded,” she told CBS 2′s Dave Carlin.

Sherman says week-long Thanksgiving holiday with family in New York ended with an ordeal that started when the screeners wanted to check the bulge from Sherman’s colostomy bag.

#3 A grandmother with a metal knee implant says that she was “touched all over” during an enhanced pat-down by TSA officials.  The following comes from an article posted on Fox News….

One of the effects of the implant is that whenever the New Port Richey woman flies, she triggers the metal detectors at airport security. She says the normal procedure is that she is then subjected to a TSA pat down. She has experienced multiple pat downs since Sept. 11.

“I feel molested. I’d like to go take a shower with Lysol (afterwards),” Miernik said, describing the pat downs, which she said includes being “touched all over.”

#4 Earlier this year, a 61-year-old retired special education teacher from Michigan was left crying and covered with his own urine after an “enhanced pat-down” went badly.  The following is how MSNBC described the incident….

Before starting the enhanced pat-down procedure, a security officer did tell him what they were going to do and how they were going to it, but Sawyer said it wasn’t until they asked him to remove his sweatshirt and saw his urostomy bag that they asked any questions about his medical condition.

The security officer finished the pat-down, tested the gloves for any trace of explosives and then, Sawyer said, “He told me I could go. They never apologized. They never offered to help. They acted like they hadn’t seen what happened. But I know they saw it because I had a wet mark.”

#5 Back in June, a 95-year-old woman with cancer was forced to remove her adult diaper as part of the “enhanced pat-down” procedure.

#6 A female cancer survivor was actually required to show her prosthetic breast to TSA thugs at Charlotte Douglas International Airport.

#7 A 71-year-old man with a knee replacement actually had his pants forcefully ripped off of him by a TSA agent right in front of other passengers.  What makes this incident even worse is that this man and his wife were taking a trip to celebrate their 50th wedding anniversary.

#8 Earlier this year, a 94-year-old woman was pulled out of line and publicly molested by TSA agents at Raleigh-Durham International Airport.  Her son says that “they groped her…all over her body“.

#9 The following is how another female cancer survivor was recently treated at JFK airport in New York….

Yesterday I went through the imaging scanner at JFK Terminal 4 for my Virgin America flight to San Francisco.  Evidently they found something, because after the scan, I was asked to step aside to have my breast area examined.  I explained to the agent that I was a breast cancer patient and had a bilateral mastectomy in April and had tissue expanders put in to make way for reconstruction at a later date.

I told her that I was not comfortable with having my breasts touched and that I had a card in my wallet that explains the type of expanders, serial numbers and my doctor’s information (pictured) and asked to retrieve it.  This request was denied.  Instead, she called over a female supervisor who told me the exam had to take place.  I was again told that I could not retrieve the card and needed to submit to a physical exam in order to be cleared.  She then said, “And if we don’t clear you, you don’t fly” loud enough for other passengers to hear.  And they did.  And they stared at the bald woman being yelled at by a TSA Supervisor.

To my further dismay, my belongings, including my computer, were completely out of sight. I had no choice but to allow an agent to touch my breasts in front of other passengers.

Sadly, it is not just elderly Americans that are being abused by these police state tactics.  In the name of “national security”, we are also treating our children like scum.

Today, public schools all over the United States are being transformed into prison camps.  In Albuquerque, New Mexico recently a 13-year-old boy was actually handcuffed and hauled out of school by police because he “burped audibly” in class.

Is that how you would like your own child to be treated?

All of this “security” garbage is completely and totally out of control.

And the next time there is a “major incident” somewhere in the United States the calls for even more “security” will be absolutely deafening.

Perhaps you think that this new emphasis on “national security” is somehow keeping you safer.

But there is actually a good chance that at some point you could become identified as a “potential terrorist”.

A new bill was just passed by the U.S. Senate which declares that the United States is now part of the “battlefield” in the war on terror.  If this bill becomes law, the U.S. military will be able to arrest anyone identified as a “potential terrorist”, ship them away to Guantanamo Bay and interrogate the living daylights out of them.

So what will get you identified as a “potential terrorist”?

Well, street protesting has been defined as “low-level terrorism” by the Department of Defense.

Have you ever been involved in a street protest?

Back in 2009, the State of Missouri issued a report entitled “MIAC Strategic Report: The Modern Militia Movement“.  That report declared that the following types of people may be potential terrorists….

Do any of those criteria apply to you?

Do any of those “signs of suspicious activity” apply to you?

America is changing.  You better wake up.

For many more examples of how the United States is being transformed into a totalitarian police state, please see this recent article….

Does anyone out there actually believe that these are healthy developments for our nation?

Instead, we are strip-searching and sexually molesting elderly Americans in the name of “national security”.

If you want to help stop America from turning into “Amerika”, now is the time to stand up and say something.