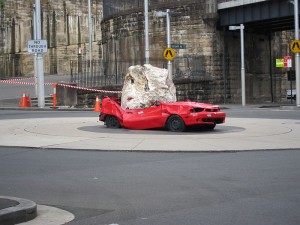 Yes, most Americans realize that the economy is not doing well right now, but most of them also believe that this is just a “temporary” downturn.  The mainstream media tells us over and over that a “recovery” has either already begun or that one is right around the corner.  Sadly, the truth is that the U.S. economy is in much worse shape than most Americans think.  Yes, there will be economic “peaks and valleys” as we move along, but it is absolutely imperative that all of us understand that we are in the middle of a long-term economic decline that has been caused by decades of horrendous decisions.  Thousands of businesses and millions of jobs have left the country and they aren’t coming back.  Last year, 23 manufacturing facilities a day were shut down in the United States and we have lost more than 56,000 manufacturing facilities since 2001.  Without enough good jobs to go around, millions of American families have lost their homes and millions of American families have been pushed into poverty.  Less good jobs also means that there are less people to pay the taxes we need to keep government services going.  Government debt at the local, state and federal levels has exploded as the tax base has dwindled.  We have become a nation that is very good at consuming wealth but that is not very good at creating wealth.  Just “tweaking” a couple of things here or there is not going to get our economy back “on track”.  We need fundamental changes to the way that we are doing things, and there are currently no signs that this kind of change is going to happen any time soon.

But many Americans don’t even realize what is happening.  As I wrote about recently, Americans are increasingly being segregated by income.  If you live in a “good neighborhood”, there is a decent chance that you might not know anyone that is having financial problems right now.  If you live in a “bad neighborhood”, it might feel like you are living in the middle of the Great Depression.

And the mainstream is constantly telling us that everything is going to be okay.

But is that the truth?

The following are 14 statistics which prove that the U.S. economy is in much worse shape than most Americans think….

#1 According to U.S. Representative Betty Sutton, America has lost an average of 15 manufacturing facilities a day over the last 10 years.

#2 Sadly, it looks like this trend is picking up momentum.  During 2010, an average of 23 manufacturing facilities a day closed down in the United States.

#4 There are way too few jobs and this is leaving a lot of people out in the cold.  The average amount of time that a worker stays unemployed in the United States is now a whopping 39 weeks.

#5 Only 48 percent of all unemployed Americans are currently getting unemployment checks from the government.  Early last year, that number was at 75 percent.

#6 There doesn’t seem to be much hope that the job market will improve significantly any time soon.  One recent survey found that 77 percent of all U.S. small businesses do not plans to hire any more workers.

#7 Without enough good jobs to go around, millions of Americans are losing their homes.  Over the past four years, more than 100,000 homes in Las Vegas alone have been lost to foreclosure.

#8 As the economy struggles, new home sales continue to suffer as well.  In fact, new home construction is poised to set a brand new all-time record low in 2011.

#9 As family budgets get tighter, Americans are saving less money and a significant percentage of them say that they have no extra money left to spend at this point.  The savings rate in the United States in September was the lowest that it has been since December 2007, and according to one recent survey one-third of all Americans say that they have absolutely no spare cash to spend on anything right now.

#10 According to one recent survey, one out of every three Americans would not be able to make a mortgage or rent payment next month if they suddenly lost their current job.

#11 If you can believe it, extreme poverty is now at the highest level that the U.S. government has ever recorded.  Today, more than one out of every seven Americans is living in poverty and more than 20 million of them are considered to be living in extreme poverty.

#12 State and local governments all over the country have gotten into massive debt problems.  At this point, the municipal bond market in the United States is coming apart at the seams.  The following is a brief excerpt from a recent article that appeared on biggovernment.com….

Moody’s Credit Rating Service just announced the ominous trend that credit quality in the municipal bond market is falling at the fastest rate since the collapse of Lehman Brothers in 2008. Data released showed that 5.3 times as many municipal bonds were credit downgraded over the three last months than were upgraded.

#13 Today, more Americans than ever are relying on the government in order to survive.  A staggering 48.5% of all Americans live in a household that receives some form of government benefits.  Back in 1983, that number was below 30 percent.

#14 Young people in particular have been hit really hard by this economy.  If you can believe it, 37 percent of all U.S. households that are led by someone under the age of 35 have a net worth of zero or less than zero.

If you are doing good in the economy, you should be very thankful because there are tens of millions of Americans out there that are deeply, deeply suffering.

Most Americans understand that something is wrong with this country.  According to a recent Fox News poll, 76 percent of all Americans are “dissatisfied with how things are going in the country”.  At the beginning of this year, that number was only at 61 percent.

So obviously frustration is rising and a lot of Americans are extremely pessimistic right now.  But most of them also believe that things will get better soon if only they vote the “correct” politician into office.

Do you believe that you have the answer to the economic problems facing this country?

If so, please feel free to leave your “economic plan” in the comments section below….