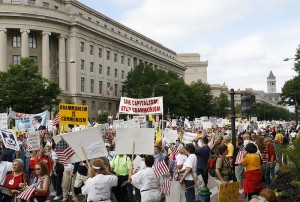 The IRS has finally publicly admitted that patriots and Tea Party groups were being specifically targeted for “extra scrutiny”, but the truth is that top IRS officials knew that this intimidating and harassing behavior was taking place two years ago.  A report by the Treasury Inspector General for Tax Administration that is going to be released this week shows that the targeting of patriots and Tea Party groups began as early as March 2010, and that the head of the IRS tax-exempt organizations division was specifically told about this targeting in June 2011.  But then the IRS lied to Congress five separate times between November 18th, 2011 and June 15th, 2012 about what was going on.  IRS officials flat out lied to Congress and adamantly denied that patriots and Tea Party groups had been specifically targeted.  So should we believe the IRS now when they try to pin the blame on a few “low-level” employees in Cincinnati?  And were Barack Obama or any members of his administration ever told about any of this?  After all, patriot groups and Tea Party organizations were screaming bloody murder about this harassment at the time and if the truth had come out before the election it could have been a massive embarrassment for the Obama campaign.  Are we to believe that nobody inside the Obama campaign ever had any discussions about this?  If Obama or those close to him did know what was going on, why didn’t they ever do anything to stop it? (Read More...)