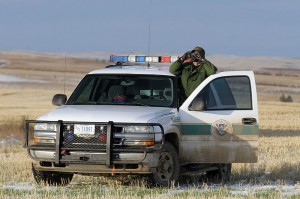 U.S. border patrol agents have incredibly dangerous jobs and they are the first line of defense for our homeland.  But instead of training and equipping them properly to defend themselves and all the rest of us, the Obama administration is actually attempting to turn them into spineless jellyfish.  If you can believe it, U.S. border patrol agents are now actually being trained to run away and hide if they encounter an “active shooter” in a public location.  If they are cornered by the shooter, they are being trained to “throw things” at the shooter.  What in the world is happening to this country?  We might as well not even have borders.  The Obama administration has made it abundantly clear that it has absolutely no intention of protecting our borders or of enforcing our immigration laws.  Protecting our borders is one thing that the U.S. Constitution requires the president to do, but Barack Obama and several other past presidents have steadfastly refused to do this.  So just what in the world is going on here? (Read More...)