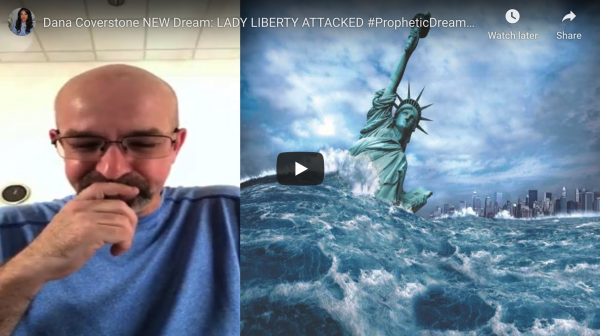 Pastor Dana Coverstone has had quite a few very troubling prophetic dreams about America’s future, but this latest dream shook him up emotionally more than any of the others.  In the dream, he saw the Statue of Liberty under attack, and he interpreted that to mean that our nation as a whole is under attack.  And of course that is definitely what we are seeing here in 2020.  Those that reject our history, our culture and our Constitution have launched a relentless assault against our most cherished traditions, and it is only going to get worse.  The goal is to reshape America into something that is fundamentally different from what our founders intended, and to a large degree they are succeeding. (Read More...)


Christians all over America are talking about Pastor Dana Coverstone, and he just had another prophetic dream about the month of September that everyone should hear.  He is warning that “something big is coming”, and he is calling Christians all over the country to pray for our nation from the beginning of the month of September to the end.  Hopefully many will heed this call, because we are definitely at a major turning point in our history.  I have been hearing from so many readers lately that feel such an urgency about the second half of this year and beyond, and I think that is a big reason why Pastor Coverstone’s original video resonated so strongly with so many people.  What he shared in that video exactly matches what countless believers have been feeling, and it also perfectly lines up with experiences that other prophetic voices have been having. (Read More...)

A few weeks ago, hardly anyone in America had ever heard of Pastor Dana Coverstone, but now hundreds of thousands of people all over the country are buzzing about him.  He leads a very small church in Burkesville, Kentucky and on June 25th he posted a video on Facebook about some remarkable things that he had seen in some of his dreams.  He probably thought that only a handful of his friends would see the video, but it quickly went viral.  At this point it has been watched by more than a million people on Facebook, and a copy that was posted to YouTube has now been viewed more than 600,000 times.  Personally, I have had countless people share his video with me over the past week, and it still hasn’t stopped.  But even though this video is spreading like wildfire, the mainstream media has been completely silent about it.  In fact, if you do a search on Google News for “Pastor Dana Coverstone”, you won’t find a single news story about his video.  What he was shown definitely does not fit their agenda, and so I expect that they will continue to generally ignore this phenomenon. (Read More...)