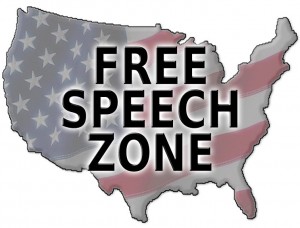 Is freedom of speech dead in America?  Well, if not, it is rapidly dying.  The most recent example to illustrate this comes out of Dearborn, Michigan.  On June 18th, two Christians decided that they would peacefully pass out copies of the gospel of John on a public sidewalk outside a public Arab festival in Dearborn, and within 3 minutes 8 policemen surrounded them and placed them under arrest.  Remember, these Christians were on a public sidewalk and were only very quietly handing out literature.  Even their cameraman was arrested for simply filming what was taking place.  The cameraman was not even involved in handing out the literature.  Yet the police arrested him.  At least two people claim that some bystanders cried out “Allahu Akbar!” as the Christians were being led away in handcuffs.  Later, the group was told that they would have to go at least five blocks away to hand out their copies of the gospel of John.  Freedom of speech has always been a big part of the American Dream, but as this incident and many others like it demonstrate, freedom of speech is rapidly being destroyed in the United States. And the American people are just standing around and letting it happen. The video posted below tells the story of what just happened a few days ago in Dearborn.  Nabeel Qureshi, David Wood, Paul Rezkalla and Negeen Mayel attended the 15th annual Dearborn Arab International Festival on June 18th with the intent of peacefully passing out copies of the gospel of John outside the festival on a public sidewalk.  The festival covers 14 blocks and was free and open to the public.  Qureshi and Mayal are former Muslims who have now become Christians.  Wood is a former atheist.  All of them are from a group called Acts 17 Apologetics.  What happened to them literally minutes after they started passing out copies of the gospel of John will have your jaw on the floor…. But this is far from the only example of free speech being trampled on in America. We have all heard about the “free speech zones” which law enforcement authorities set up wherever major politicians go.  Often these “free speech zones” are so small and so enclosed that they resemble little more than jail cells.  Apparently Americans still have freedom of speech as long as they do it in a little cage set up by authorities.  The implication of these free speech zones is that everyone outside of the cage does not have the right to exercise free speech.  How sick is that? Brian and Doris Johnson were recently arrested for attempting to pass out free Bibles at the Twin Cities Pride Festival in Minnesota.  The truth is that it is hard to even get police to come out to your house if it has been broken into these days, but if you try to pass out Bibles at a “pride” festival they will come down on you like rabid dogs. Michael Anthony Marcavage, founder of Repent America ministries, was recently arrested for holding signs depicting graphic images of aborted babies and preaching to people waiting in line to enter the Liberty Bell Center in downtown Philadelphia.  Apparently speaking out against abortion is not “politically correct” enough to be protected. Authorities have even attempted to ban home Bible studies in some areas of the United States.  That is just how bad things are getting out there. Of course we all remember the University of Florida student who cried out “Don’t taze me bro!” after he was tackled to the floor and manhandled by police simply for asking John Kerry the wrong question…. The most disgusting thing about that whole situation was when news “anchors” on some of the major networks actually applauded the tazering of that poor young student. Whether you agree with that student or any of the other examples of free speech above, the truth is that we all need to stand together to protect it.  If free speech is taken away from one of us, then it is taken away from all of us. Without free speech it is very easy for a nation to turn into another Nazi Germany.  In fact, a large number of nations around the globe are already headed down that path. Someday websites such as this will be shut down because they are “offensive” to someone out there.  Already, the FCC is pushing for tighter speech restrictions on the Internet because they say it has become more difficult for the public to separate “the facts” from “bigotry masquerading as news”. Of course the “facts” would be whatever they consider to be “politically correct” and “bigotry” would be anything that disagrees with them. Do you see how that works? The truth is that Americans are going to continue to be pushed into free speech zones, they are going to continue to be arrested for handing out literature on public sidewalks and the government is going to continue to place tighter and tighter controls on the Internet unless we stand up and say something. Do not take freedom of speech for granted.  We are rapidly losing it, and once it is gone it will be incredibly difficult to get back. (Read More...)