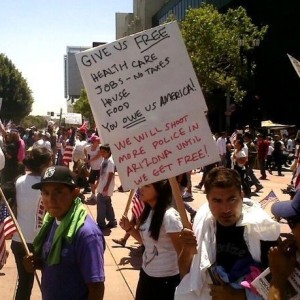 Should we roll out the red carpet and allow millions upon millions of thieves, rapists, gang members and drug dealers to come waltzing into this country any time they would like?  Should we broadcast a message to the rest of the world that anyone that can find a way to enter this country and somehow get to a “sanctuary city” can sign up for a plethora of welfare benefits and live a life of leisure at the expense of hard working American citizens?  Yes, those questions sound absurd, but what I have just described will essentially be official U.S. government policy if the immigration bill going through Congress becomes law.  And unfortunately, Democrats now say that they have the Republican votes that they need to get “immigration reform” through the House of Representatives.  If this amnesty bill becomes law, it will encourage even more illegal immigration and it will be one more step toward making the U.S. border essentially meaningless.

Right now, we desperately need the American people to contact their representatives in Congress and demand that they vote against this bill.  Sadly, this is not likely to happen because most Americans have absolutely no idea how negatively illegal immigration is affecting this nation.

#1 57 percent of all households that are led by an immigrant (legal or illegal) are enrolled in at least one welfare program.

#2 According to one study, the cost to U.S. taxpayers of legalizing current illegal immigrants would be approximately 6.3 trillion dollars over the next 50 years.

#3 The Obama administration has distributed flyers that tell illegal immigrants that their immigration status will not be checked when they apply for food stamps.

#4 The Department of Homeland Security says that it has lost track of a million people that have entered this country but that appear never to have left.

#5 One out of every five children living in Los Angeles County has a parent that is in the country illegally.

#6 In one recent year, taxpayers in Los Angeles County spent 600 million dollars on welfare for children of illegal immigrants.

#7 Thanks to illegal immigration, California’s overstretched health care system is on the verge of collapse.  Dozens of California hospitals and emergency rooms have shut down over the past decade because they could not afford to stay open after being endlessly swamped by illegal immigrants who were simply not able to pay for the services that they were receiving.  As a result, the remainder of the health care system in the state of California is now beyond overloaded.  This had led to brutally long waits, diverted ambulances and even unnecessary patient deaths.  At this point, the state of California now ranks dead last out of all 50 states in the number of emergency rooms per million people.

#8 It has been estimated that U.S. taxpayers spend $12,000,000,000 a year on primary and secondary school education for the children of illegal immigrants.

#9 It is estimated that illegal aliens make up approximately 30 percent of the population in federal, state and local prisons and that the total cost of incarcerating them is more than $1.6 billion annually.

#10 The federal government actually has a website that teaches immigrants how to sign up for welfare programs once they arrive in the United States.

#12 The Obama administration has sued individual states such as Arizona that have tried to crack down on illegal immigration.

#13 According to the FBI, there are approximately 1.4 million gang members living in our cities.  Illegal immigration has been one of the primary factors that has fueled the growth of these gangs.

#14 As I have written about previously, there are only about 200 police officers assigned to Chicago’s Gang Enforcement Unit to handle the estimated 100,000 gang members living in the city.

#16 It is an open secret that Mexican drug cartels are openly conducting military operations inside the United States.  The handful of border patrol agents that we have guarding the border are massively outgunned and outmanned.

#17 According to the Justice Department’s National Drug Intelligence Center, Mexican drug cartels were actively operating in 50 different U.S. cities in 2006.  By 2010, that number had skyrocketed to 1,286.

#18 Overall, more than 55,000 people have been killed in drug-related violence in Mexico since 2006.  That same level of violence will eventually show up in major U.S. cities unless something dramatic is done about illegal immigration.

#19 It is being projected that the Senate immigration bill will bring 33 million more people to the United States over the next decade.

One of the very few things that the federal government is actually required to do by the U.S. Constitution is to defend our borders, and unfortunately the Obama administration has willingly chosen to leave our borders completely wide open.  In fact, you can go down to the Texas border right now and watch illegal immigrants hop right across the Rio Grande.

Several retired Border Patrol agents recently drafted an open letter to the American people on the subject of illegal immigration, and what they had to say was quite startling.  The following is an excerpt from that letter that was in a recent Breitbart article…

“Transnational criminal enterprises have annually invested millions of dollars to create and staff international drug and human smuggling networks inside the United States; thus it is no surprise that they continue to accelerate their efforts to get trusted representatives in place as a means to guarantee continued success,” the Border Patrol agents wrote.

“We must never lose sight of the fact that the United States is the market place for the bulk of transnational criminal businesses engaged in human trafficking and the smuggling, distribution and sale of illegal drugs. Organized crime on this scale we are speaking about cannot exist without political protection.”

According to those retired border agents, by refusing to secure our border the Obama administration is openly facilitating the trafficking of drugs into the United States…

“Most heroin, cocaine, meth, and marijuana marketed in the United States is produced outside of our country, and then smuggled into the United States,” they wrote. “The placement of trusted foreign employees inside the United States is imperative to insure success in continuing to supply the demand, and returning the profits to the foreign organization. Members of these vicious transnational crime syndicates are already well established in more than 2,000 American cities and their numbers are increasing as networks expand and demands accelerate. These transnational criminals present a real and present danger to all Americans, and they live among us.”

Sadly, in politically correct America you can’t even talk about the problem of illegal immigration these days without being labeled as a “racist”.

For the record, I believe that all people deserve love and respect no matter what they look like or where they are born.  God created us all and He loves us all very much.  I have long been a very strong advocate for racial reconciliation in this country, and I will continue to be.

And there are tens of millions of Latino-Americans in this country that are hard working, law-abiding citizens.  They have done things the right way, and it is extremely unfortunate that they often get lumped in with millions of illegal immigrants that willingly choose to break our laws.

Unfortunately, we have a system of immigration today that greatly rewards lawless behavior.  We have made coming into this country through the front door exceedingly difficult, but we have left the back door completely wide open.

So hard working, law-abiding people that want to do things the right way are kept out, but those that want to come here and commit crimes or abuse the system are free to come on over any time that they would like.

What sense does that make?

Our immigration system is completely broken, but these days we cannot even have a rational debate about these issues.  In politically correct America, illegal immigrants have become a “favored class” of people that you are never supposed to say anything bad about.

In fact, one activist recently went out and actually got people to sign a petition that said that we should let illegal immigrants out of prison no matter what crimes they have committed…

I would love to hear what all of you think.  Please feel free to express your opinion by posting a comment below… 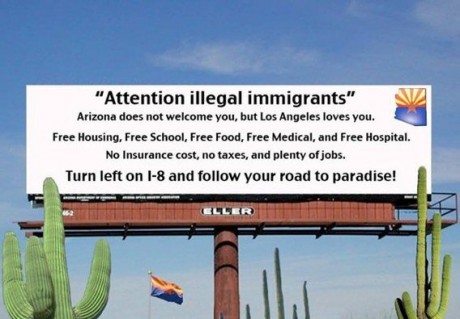