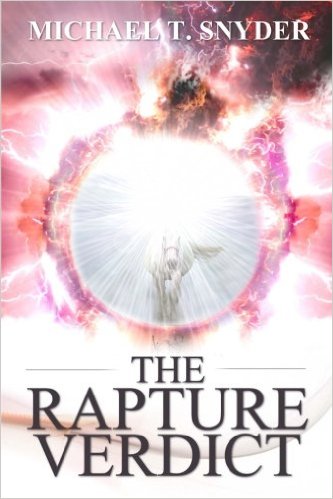 My new book entitled “The Rapture Verdict” is the most important thing that I have ever written, but it is also one of the most controversial because I directly challenge what most churches in the western world teach about the second coming of Jesus Christ. In fact, I lay out the most comprehensive case that you will find anywhere for why Christians are going to have to go through the Tribulation and face the Antichrist and the Mark of the Beast. There is going to be a rapture, but it is going to come immediately after the Tribulation is over (Matthew 24, Mark 13, etc.). In this book I lay out evidence that you are not going to find anywhere else, and I deal with the major arguments that those that believe in a pre-Tribulation or mid-Tribulation rapture commonly like to make.

For years, I have avoided hitting this subject head on, because I don’t like to upset my brothers and sisters in Christ if I can avoid it. Believe it or not, I am actually a very low drama person. I hate strife and discord, and I avoid pointless religious debates on sites like Facebook like the plague.

So then why have I written a book about one of the most controversial subjects in the Christian world today?

Well, the truth is that I felt called to do it. For years, if people had questions about the timing of the rapture or other aspects of the last days, there was no book or DVD that I could point them to that I felt really “nailed it”. So in “The Rapture Verdict” I have made my best effort to clearly explain what the Bible actually has to say about all of these things. Hopefully you will enjoy what I have to share.

I truly do not want to upset anyone. If you firmly believe in a pre-Trib or mid-Trib rapture and you are not interested in another perspective on what the Bible has to say about the last days, then maybe this is not the book for you. I love all of my brothers and sisters in Christ, and I don’t want this book to get in the way of my relationship with anyone. My goal is to live peacefully with all people, and if you disagree with me on the rapture or anything else that is okay. Let’s agree to disagree and let’s all learn to love one another the way that Christ loved us.

I grew up during a time when it seemed like everyone in the Christian world believed in a pre-Tribulation rapture. My parents did (and still do), every church that I ever attended taught that there would be one, and all of “the experts” confidently assured me that the Bible was very clear on the matter.

As a little boy I devoured The Late Great Planet Earth by Hal Lindsey, and as I got older I studied the works of virtually all of the most prominent authors in the field of Bible prophecy. If you have an interest in Bible prophecy, you will instantly recognize many of their names: Tim LaHaye, Grant Jeffrey, Chuck Missler, Jack Van Impe, J. R. Church, Dave Hunt, Perry Stone, John Ankerberg, Zola Levitt, Gary Stearman and Peter and Paul LaLonde. I even read every word of all 12 books of the Left Behind series, and to this day I still have them in my library.

So what changed my mind?

Studying the word of God did.

When you examine what the Bible has to say without any preconceived doctrinal agendas, it is actually exceedingly clear about the second coming of Jesus Christ. I have spent decades studying this stuff, and in my new book I attempt to put all of the pieces of the puzzle together in a very clear and systematic manner.

To give you an idea of what is covered in the book, the following are the titles for the 37 chapters…

1 Why Write This Book?
2 It Isn’t That Complicated
3 What Exactly Is “The Rapture”?
4 The Parousia
5 The Day Of The Lord Cometh
6 After The Tribulation Of Those Days…
7 The Last Trumpet
8 The Rapture Is In The Book Of Revelation
9 The Battle Of Armageddon
10 The First Resurrection
11 The Revealing Of The Man Of Sin
12 The War Against The Saints
13 God Has A Calendar
14 The Dress Rehearsal For The Rapture
15 Yom Kippur, The Return Of Jesus & The Book Of Joel
16 We Are Not Appointed To Wrath
17 Pray That You May Escape
18 That Day And Hour
19 A Thief In The Night?
20 The Restrainer
21 The Blessed Hope
22 Come Up Hither
23 The Very Best Evidence For A Pre-Tribulation Rapture
24 The Very Best Evidence For A Mid-Tribulation Rapture
25 A Note Regarding The History Of The Pre-Tribulation Rapture
26 On The Last Day
27 The Curious Case Of Daniel 12
28 Every Eye Will See Him
29 People Are Going To Be Angry
30 Corrie Ten Boom’s Ominous Warning
31 The Tribulation Is Not Starting Yet
32 The Judgment Of God Is Coming To America
33 The Remnant Is Rising
34 The Remnant Has Somewhere To Go
35 Jesus Is Coming Soon
36 101 Key Points To Remember
37 The Most Important Thing

Like I said earlier, I avoided writing about this topic for a long time, but God started to impress upon me that I needed to address this. You see, the number one reason why Christians are not getting prepared for the hard years that are coming is because most of them believe that they are going to get pulled out of here before anything really bad happens.

And most churches are not preparing their flocks to face persecution, torture and death because they are entirely convinced that we will never have to face the Antichrist or the Mark of the Beast.

It is kind of like they have gone to Las Vegas and put all of their chips on a pre-Tribulation rapture. When it doesn’t happen, millions of Christians will suddenly become very angry with the preachers that led them astray. Others will plunge into depression and despair from which they may never recover. We may even see some believers deeply question whether their faith is actually true or not, and some may be tempted to give up on life entirely.

But there is no reason to be down about the future. In fact, my wife and I believe that the greatest chapters of our lives are still ahead of us. In the midst of all of the chaos and all of the darkness, God is raising up a Remnant. This Remnant is going to bring in the greatest harvest of souls the world has ever seen, it will move in the power of the Holy Spirit like we haven’t seen since the Book of Acts, and it will prepare the way for the most dramatic moment in human history – the return of Jesus Christ to this planet.

If you always wanted to live in Biblical times, you are about to get your wish. We need to get believers to understand that the times that are coming are not something to be feared. Rather, now is the time to prepare for the coming battle because it is going to be the finest hour for the church.

The Rapture Verdict is an ominous warning, but it is also an inspiring message of hope. As I was writing the book, I felt very strongly impressed that I was to explain to people why they can look forward to what is coming. Yes, we are moving toward the worst times in all of human history, but it is when times are the darkest that the greatest heroes are needed.

There is no other time that my wife and I would rather be alive than right now. We will not bend, we will not bow and we will not yield to the enemy, and our Lord and Savior Jesus Christ will find up building His Kingdom up until the moment when the sky cracks open and He comes and gets us.

The Lord Jesus deserves a bride that is wildly and madly and passionately in love with Him, and we cannot become that bride on our own. But with His help we will write the end of the story and we will become the kind of bride that He has always deserved.

So I hope that you will check out The Rapture Verdict. It is a giant wake up call to a sleeping church. The main event is about to start, but so many Christians today are just waiting by the door waiting for their rides to show up.

I believe that there is a reason why millions upon millions of people have visited this website. God is raising up a Remnant in these last days, and He is going to use ordinary people like you and ordinary people like me. There is no individual, church or denomination in charge of this Remnant. It is an organic move of God that is happening all over the world, and what we have seen so far is just the beginning.

Don’t fear the days ahead. Yes, they are going to be incredibly challenging, but none of this is catching God by surprise. God knew about all of this in advance, He has a plan, and He is in control.

And someday they will tell stories about the courageous men and women of the Remnant that set their faces like flint and stood tall in the midst of the worst times in all of human history. Clothed in the armor of God, we will fight against the enemy to the very end, we will rescue millions of precious souls from the gates of hell itself, and we will experience the greatest move of the Spirit that the world has ever known. Then when it is all said and done, our King shall come on the clouds, a great trumpet shall sound, and we will be with Him forever.

29 Immediately after the tribulation of those days shall the sun be darkened, and the moon shall not give her light, and the stars shall fall from heaven, and the powers of the heavens shall be shaken:

31 And he shall send his angels with a great sound of a trumpet, and they shall gather together his elect from the four winds, from one end of heaven to the other.