All over the globe, the mood is turning sour.  Anger and frustration are bubbling over, and protests are becoming violent in major cities all across the planet.  In some cases economic pain is driving the protests and in other cases political matters are motivating the protesters, and it has been a very long time since we have seen so many angry protests happening all over the world simultaneously.  Unfortunately, many believe that what we have seen so far is just the beginning.  Global economic conditions are rapidly deteriorating, and as economic pain intensifies that is only going to make everyone more frustrated.  And here in the United States, the drama surrounding the potential impeachment of Donald Trump is going to greatly escalate the political tensions that are already deeply dividing this country.  No matter how things turn out, a large percentage of the population is likely to be deeply frustrated with the result, and that could very easily lead to tremendous civil unrest. (Read More...) 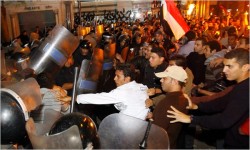 Over the past week, the mainstream media has not really done a good job of communicating how intense the violence and bloodshed in Egypt has become.  Trucks and cars have been plowing into groups of protesters at high speed, dozens of protesters have been shot and killed, and the violence only seems to get more crazy with each passing day.  Seriously, if you cannot handle scenes of graphic violence and people dying, then you probably should not watch the videos posted below.  These are 10 of the most shocking videos of the protests in Egypt, and they are incredibly graphic.  This is a real revolution that is happening in Egypt and it is very bloody. (Read More...)